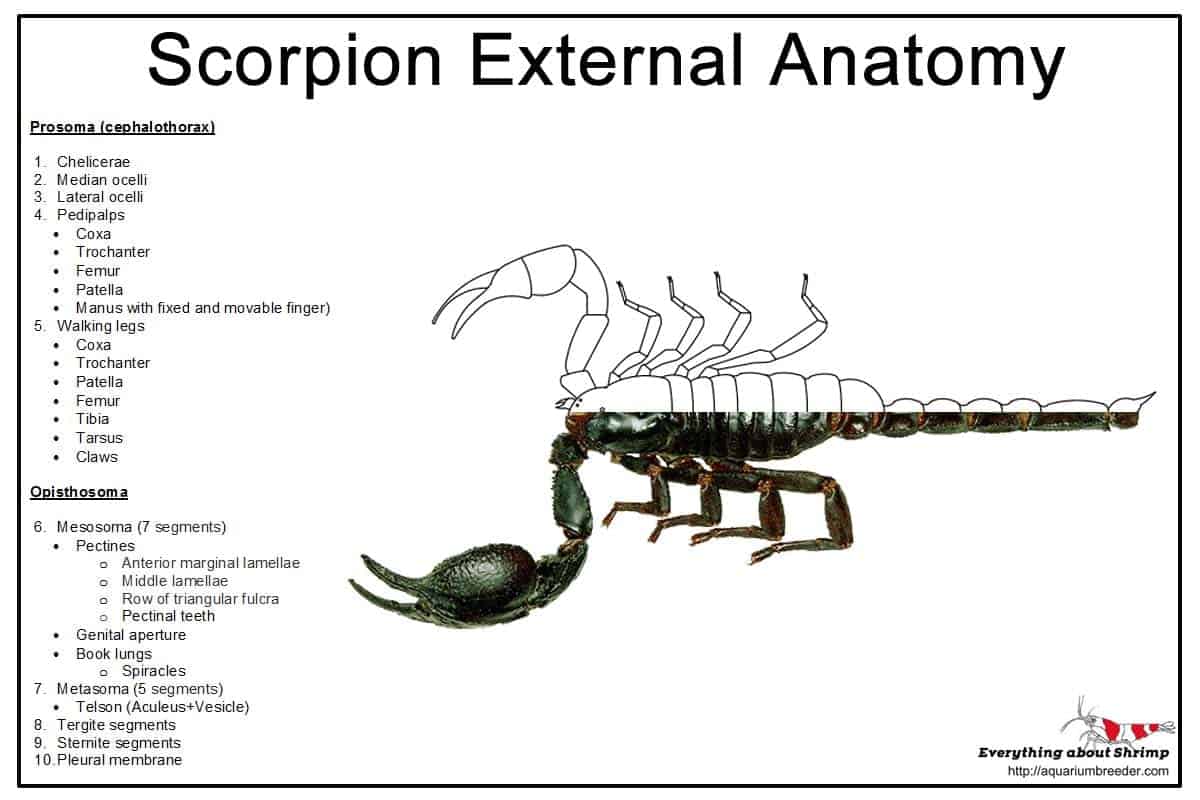 Due to the fact that scorpions comprise a few thousand species, it is absolutely not possible to mention all the anatomical differences between them in one article. Therefore, I will describe the scorpion anatomy in general.

In short, the scorpion’s body is divided into two main parts: the cephalothorax (prosoma) and the abdomen (opisthosoma). The prosoma consists of the head, carapace, eyes, mouthparts, two grasping pincers, and four pairs of walking legs. Opisthosoma consists of the mesosoma and metasoma that bears the telson.

In scorpions, most of their internal organs (the digestive, excretory, respiratory, and reproductive systems) are located in the opisthosoma (the rear area), whereas prosoma protects the brain, digestive glands, and foregut.

In this article, I am going to talk about the external anatomy of the scorpions in detail. So, keep reading for everything there is to know about these amazing creatures.

Scorpions have a hard outer covering called an exoskeleton made of chitin. This exoskeleton provides protection from predators and the rigors of the physical environment (like cold, heat, dryness, etc.). It also serves as the basis for the attachment of the muscle system.

They have long, fine hair-like structures (called trichobothria or setae) scattered all over the body. The setae are sensitive to the touch and give spatial orientation. 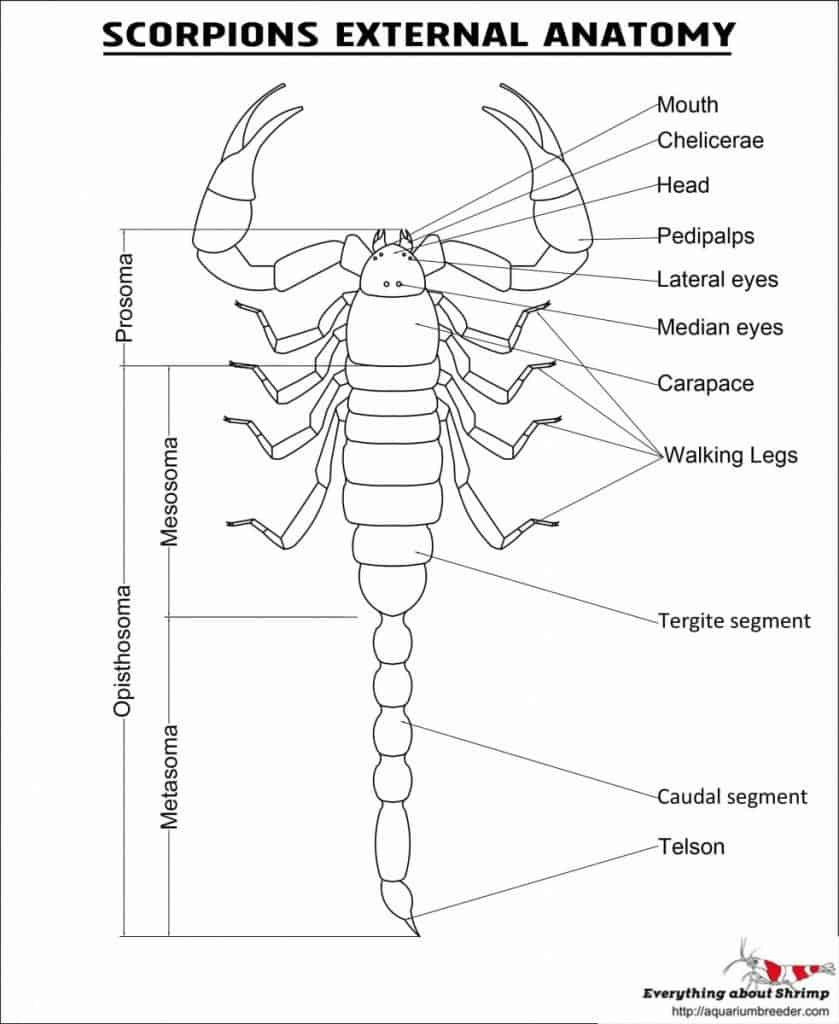 Prosoma translates from Greek pro- + sōma body. Sometimes it is also called cephalothorax (cephalic+ thoracic) consists of the cephalic (or head) region and the thoracic (or chest) region.

In over words, the prosoma is the front body section of a scorpion (a combination of head and chest). This separation is absolutely nominal because head-chest areas are basically ‘fused’ together. It means that the scorpion is unable to turn its head.

Due to the fact that scorpions are characterized by a joined head and chest, biologists usually do not refer to this part of their body by itself.

The mouth is a small, transverse, ven­trally located opening at the anterior end of the head.

The chelicerae are a scorpion’s jaws. They are located on the very front of its head and appear before the mouth. This appendage is small, end­ing in a chela.

The scorpion has a pair of these chelicerae. Each chelicera forms pincer-like claws and can move independently of the other.

In a scorpion, the chelicerae are not hollow, thus they cannot have venom glands. However, these appendages are very sharp with scissor-like cutting edges. It allows the scorpion to cut up and masticate the food during preoral digestion.

Note: The general morphology of chelicerae varies mainly in the structure and number of teeth.

Scorpions possess two types of visual organs, the lateral and median eyes (in the center of the prosoma). Depending on the species, the number of pairs of lateral ocelli can vary from 2 to 5.

Scorpions have a single pair of eyes on the top of the carapace. The median eyes are used for acuity and spatial discrimination.

Note: According to the study, almost all scorpions have median eyes, except for 26 species (mostly cave-dwelling species). 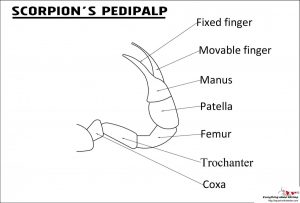 Scorpions have a pair of pedipalps attached to the head, located on the body segment near the mouth.

The pedipalps have several main functions:  fighting, feeding, mating, and, in certain species, for digging burrows.

Generally, the pedipalps can be divided into:

In scorpions, fixed and movable fingers of the pedipalps also have marked differences in the granulations of their cutting edges.

Besides the pedipalps, the prosomal appendages of scorpions also include four pairs of walking legs which they also use for digging and sensing the environment.

Generally, the leg can be divided into 6 segments:

In scorpions, the coxa is a functional base of the leg. The joint between the body and the coxa is relatively immobile. At the end of the tarsus is the apotele, which contains the ungues (lateral claws).

Each of the leg segments articulates with the next segment in a hinge joint.

The abdomen (or opisthosoma) is the posterior part of the body located behind the prosoma. Opisthosoma lacks appendages.

In scorpions, we can see only 12 segments of the opisthosoma (called tergites). In reality, there are 13 segments but the first segment can be only seen during its embryological development.

Abdomen is the main muscle that allows scorpions to move. The opisthosoma is composed of two parts:

The mesosoma is composed of seven segments (only six are visible) each bearing a tergite. Ventrally there are five sternites.

The tergite and sternite segments are joined by a whitish membrane called a pleural membrane. This membrane will stretch when the scorpion is full, pregnant, or molting.

Note: As was mentioned earlier, the pregenital (first) segment is reduced. The second segment contains the sensory and sexual organs (pectines).

The pectines are located ventrally on the second segment of mesosoma just behind the sternum. It looks like a delicate pair of comb-like organs.

These are chemo- and mechanosensory appendages that are used as sensory organs via thousands of peg sensilla on ground-facing teeth.

According to the study, this organ allows scorpions to sense the nature of the substrate and detect substrate vibrations.

The pectines are composed of:

Pectines are larger and longer in males.

The genital aperture can be found between the coxae of the walking legs and is protected by a pair of small plates called the genital opercula.

In females, the genital opercula are often fused, but not in males. However, in some species, males have a pair of genital papillae protruding from the posterior part of the operculum.

Each sternite bears two pronounced furrows (called Spiracles). Depending on the scorpion species, the spiracles can be slits, circular, elliptical, or oval.

The spiracles serve as openings for the scorpion’s respiratory organs (Book lungs). This is a muscular structure that opens or closes in response to the oxygen needs of the scorpion.

The post-abdomen is a narrow section of scorpion’s body known as metasoma. Basically, the metasoma is the tail.

The metasoma consists of 5 body segments terminated by a telson (stinger). 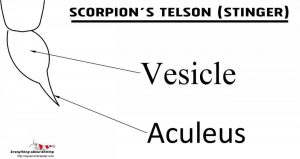 In scorpions, the original function of the telson is mechanical playing a major role in predation and defense.

The telson is composed of two parts:

The vesicle contains a pair of glands that produce and store the components of the venom. The aculeus has two exit ducts, each corresponding to one of the glands and it acts as a ‘spear-head’.

In some scorpion species, just below the aculeus, the telson also may have a small, median subaculear tubercle.

Interesting fact: Venom is controlled voluntarily by the contraction of the muscles surrounding the glands. Therefore, all scorpions can regulate how much venom is injected.

If you keep scorpions as pets or simply study them, it will be a good idea to have at least a basic understanding of their anatomy.

All scorpion species have segmented bodies that are divided into two parts: the body (prosoma) and the abdomen (opisthosoma).

The head and carapace (the prosoma) are fused together. The abdomen is subdivided into: the pre-abdomen (mesosoma) and the post-abdomen (metasoma) which bears a bulbous sting.

They have 4 pairs of walking legs and one pair of claws (called Pedipalps).