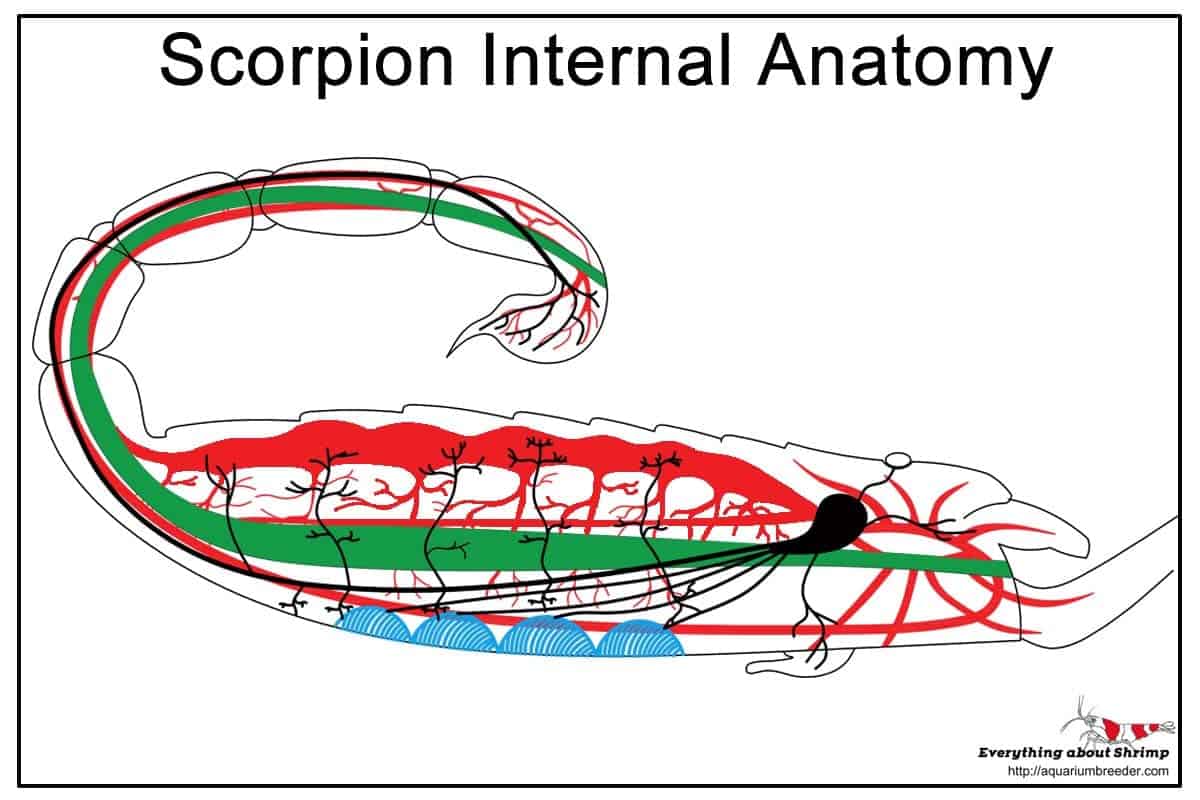 In this article, you will know more about the internal anatomy of scorpions. This is the second part of the article dedicated to scorpion anatomy (the first one was about their external structure).

Without further ado. Let’s look at each of these systems in detail.

1. The Circulatory System of Scorpions 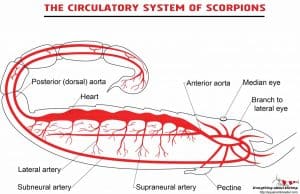 All scorpion species have an open circulatory system which is typical for arthropods. It includes the heart, hemolymph, aorta, and sinuses.

Note: The open circulatory means that scorpions almost do not have blood pressure and their entire abdominal cavity is filled with hemolymph (blood). It is almost ideal for simple animals (such as scorpions, crabs, crayfish, shrimp, etc.) with low metabolic rates. Scorpions have a particularly slow metabolic rate even compared to similar-sized arthropods.

The heart is perforated by small, seven pairs of slit-like pores (called Ostia).

This is because hemolymph contains hemocyanin, which gets its blue color from the copper that is part of its structure.

Arteries branch further into smaller arteries that carry blood to each organ, limb, and nerve cord.

Basically, the entire abdominal cavity is surrounded and filled with hemolymph that has direct contact with the scorpion’s internal tissues and organs. So, the blood is not segregated from interstitial fluid.

When the heart relaxes, the blood returns back to the heart through the pores (Ostia), to start the cycle again.

2. The Respiratory System of Scorpions 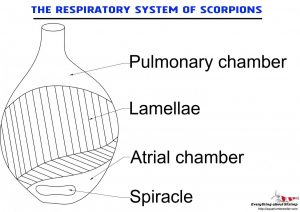 The respiratory system of scorpions consists of four pairs of book lungs. These are rudimentary or primitive lungs used for atmospheric gas exchange.

Note: Book lungs got their name due to their anatomical structure. Each book lung is made of a series of thin membranes (called Lamellae) that are arranged like the pages of a book. Each membrane is hollow which allows hemolymph to flow through them and saturate the body with oxygen.

The book lungs are located in the 4th, 5th, 6th, and 7th segment of mesosoma and can be noticed by the pronounced furrows (called Spiracles).

Depending on the scorpion species, the spiracles can be slits, circular, elliptical, or oval. They are muscular structures and control (open or close) the book lungs.

Scorpions do not breathe in the true sense of the word. Instead of active respiration, they utilize diffusion for gas exchange. For that, each book lung is surrounded by a sinus. So, when the heart pumps hemolymph (blood) it goes into and out of the lamellae.

3. The Nervous System of Scorpions 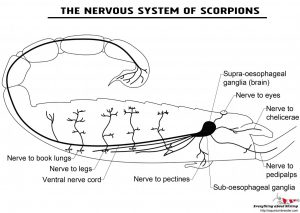 Scorpions have a simple nervous system that consists of:

The brain (or Supra-oesophageal ganglia) is located in the back of the prosoma just above the oesophagus and beneath the median eyes. It mostly connects to the cheliceral and optic nerves.

Note: Actually, scorpions have a very rudimentary ‘brain’; it is a very small bilobed mass and consists of only a few nerve cell clusters (cerebral ganglion or ganglia). The ganglia interconnect by bundles of nerve fibers that transport the signals at high speed.

The sub-esophageal ganglion connects to the claws, walking legs, and abdomen.

Although two main ganglia are divided horizontally, the nerves radiate from both and form the peripheral nervous system.

The ventral nerve cord extends along the abdomen of the scorpion and runs to the rear end of the body (to the telson). It also has small nerve clusters at the end of each segment (walking legs, book lungs, etc.).

Even though the nervous system of the scorpions is not completely centralized, it still exhibits cephalization.

4. The Digestive System of Scorpions 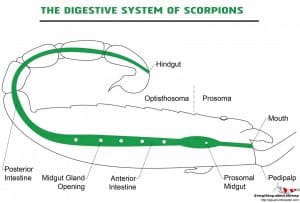 The scorpion’s digestive system is essentially a long alimentary canal that is divided into 4 functional parts:

The foregut has functions in both mechanical and extracellular digestion. Basically, it stores, grinds, and transports food to the midgut.

Anatomically, the foregut can be divided into:

This is where the main digestion takes place. It looks like a long tube and consists of:

This is a very short part of the alimentary canal.  The hindgut starts in the last metasomal segment and extends as far as the anus which is surrounded by 4 chitinous plates which keep it usually closed.

The scorpion’s digestive system works in the following way:

5. The Reproductive System of Scorpions

Generally, to differentiate between males and females, we have to look at the pectins. Males have a larger number of pectinal teeth compared to females.

In scorpions, the male reproductive organs consist of:

The female reproductive system con­sist of:

Note: In females, the genital opercula are often fused, but not in males. However, in some species, males have a pair of genital papillae protruding from the posterior part of the operculum.

The process of mating in scorpions consists of 3 phases:

In the introductory phase, the male grips the female’s pedipalps and approaches her at a very short distance. Next, he starts rocking his body forward and backward. After ‘the cheliceral massage’, the female generally became more cooperative and less aggressive.

In the promenade phase, the male starts to move backward and forward with the female following him. At the same time, the male’s first pair of legs sweep the substrate to clear a suitable place for spermatophore deposition.

In the third phase, the male lowers his mesosoma until the genital aperture touches the ground where he deposits spermatophore. Next, he pulls the female onto a proper position over the spermatophore, so it will be touched and collected by the female genital operculum. Fertilization is internal.

The mating process may continue for 30 to 90 minutes.

In scorpions, the brain is located in the back of the prosoma and the mesosoma (pre-abdomen) contains most of their organ systems, including the circulatory system, the respiratory system, the reproductive system, and digestive glands.

link to Are African Frogs and Shrimp Compatible?

Like dwarf shrimp, African frogs (African dwarf frogs and African clawed frogs) have increased in popularity in recent years. As a result, many aquarists have a reasonable question – “Are...

Urocaridella Antonbruunii, generally known as the Red-white cleaner shrimp are fascinating small shrimp and a great albeit somewhat uncommon addition to a marine aquarium. The Red-white...