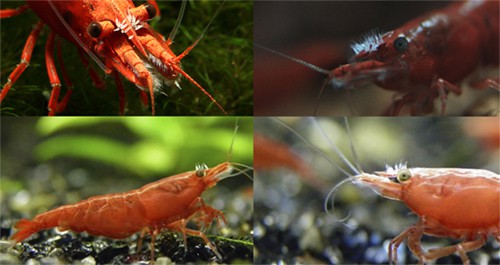 Today we will talk about a shrimp disease called Scutariella Japonica. It seems to be the most common shrimp parasite. You will know why it can happen to your shrimp, how you can identify it, ways of treatment (Freshwater aquarium salt, Seachem ParaGuard, Praziquantel, Fenbendazole, Internal Parasite Clear, Benibachi Planaria Zero and No Planaria treatment), and how to prevent contamination of the rest shrimp colony.

The shrimp hobby has grown a lot in recent years. As a result, it has created a huge demand for shrimp. Unfortunately, local shrimp shops are not able to meet this demand anymore and have to import shrimp.

Here comes the bad news. The main problem with the imported Neocaridina shrimp is that they are not bred in a closed environment. Thus they are showing a bigger prevalence for the disease. Lucky us but most of the tigers, bee, crystal shrimp are still being bred inside but for how long it will last.

How to identify Scutariella Japonica?

The first thing to look for is the small white 1 to 2 millimeter branchy appendages on top of the shrimp’s head, and down the rostrum. These parasitic nematodes are called Scutariella Japonica (Classification – Plathelmintae/Tubellaria/Temnocephalidae/Scutarielloidea). They are flatworms (similar to planaria).  However, they behave differently.

The parasites usually live in the gills or mantle of the shrimp. They generally attach themselves somewhere between the eyes or on the shrimp’s rostrum. It is very rare to see them on shrimp legs and other body parts. 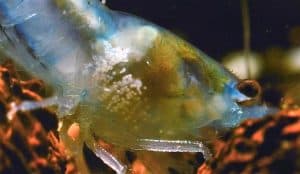 The second way you can identify them is by looking for eggs in the shrimp’s plate. The parasites are very clever, they lay their eggs behind the head on the gill chamber in little rows (white dots).

When the shrimp changes its exoskeleton, the eggs are released and, after being born, they colonize another host.

Usually, you can see them even with the naked eye without any special tools for that.

Scutariella Japonica is usually confused with the protozoa Vorticella. Although they have nothing in common at the taxonomic level. An easy way to differentiate them is by color: the Vorticella is transparent or almost transparent while the Scutariellas are opaque, in addition to white. 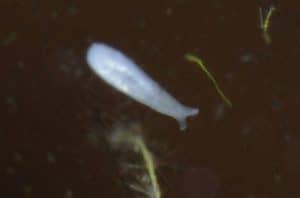 If we observe the parasite with a magnifying glass or magnifying lens, we can see that on the one end this flatworm has a sucker to attach to the shrimp’s shell. While on the other end it has a kind of primary tentacles. The parasite feeds on the plasma of the host shrimp and detritus contained in water exhaled from the gills.

Is Scutariella Japonica dangerous to the Shrimp?

Scutariella Japonica is actually rather harmless to the shrimp. It will not actually kill the host or really cause it any damage.

Unless they get in really high numbers. In this case, the parasites may even cause casualties since they interfere with the breathing and mobility of the shrimp, causing destruction to the host body structures (According to the study “Parasites and Wildlife First molecular identification of Vorticella sp. from freshwater shrimps in Tainan“, Taiwan).

Observation shows Scutariella japonica can use shrimp as its own mobile base (for example by attaching itself to the rostrum) to obtain organic material from the water column as well as living its parasitic lifestyle using shrimp as its host (for example attaching to the gills).

Thanks to this ability to adapt Scutariella japonica can be dangerous to the aquarium shrimp keeping as it can easily infect not only weakened individuals but also healthy ones.

Possible causes: unclear but most likely because of poor water conditions. 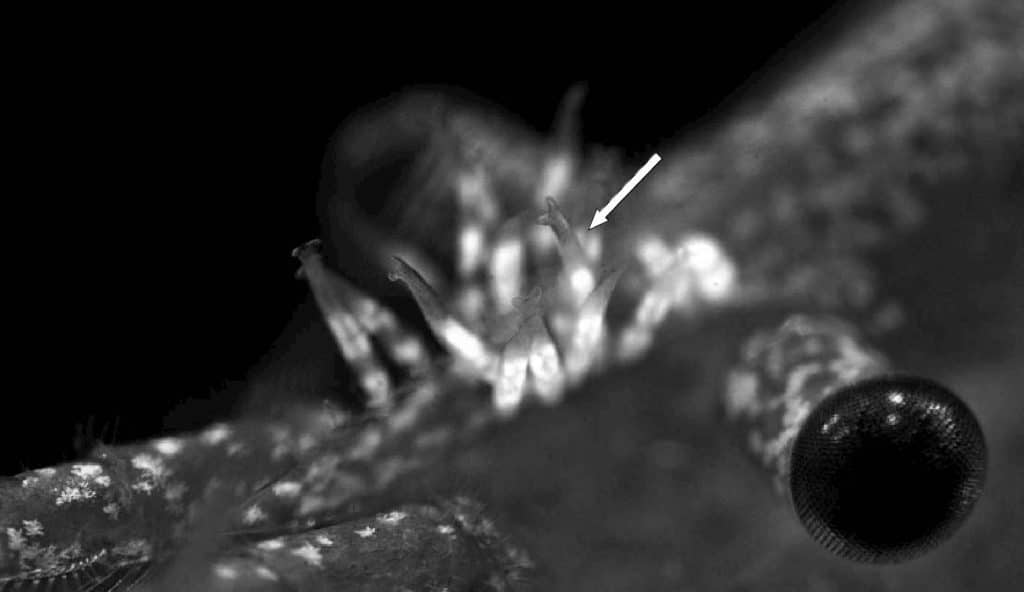 How do you treat these parasites? 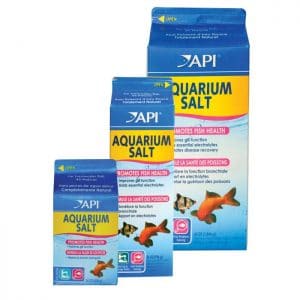 The first way to remove this parasitic trematode is to use salt. Freshwater aquarium salt (link to check the price on Amazon) would be the safest choice. Although you can use table salt as well.

Some shrimp breeders categorically do not advise using the salts that we use at home because these salts contain potassium iodine. For us, for humans, the potassium iodine is very important so we will not get thyroid disease. However, for shrimp…

I have spent lots of time trying to find any scientific studies that showed that shrimp need iodine from the water column. I did not find any. Neither could I find any that demonstrates that they do not need it. We only know that shrimp get most of their iodine from the food, and even then, the amount required is minuscules.

There are two downsides of this method:

That removes all the visible external parasites. Scutariella Japonica will be gone from the shrimp’s body. I have seen no shrimp mortality using this treatment. Unfortunately, saltwater does not have any effect on the eggs of the parasite and you will have to deal with them later. 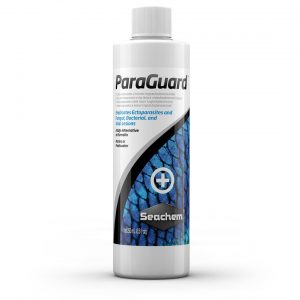 Instead of treating each shrimp, you can treat the whole tank. You will hear and read about this medicine almost in every article about shrimp diseases. ParaGuard (link to check the price on Amazon) does not seem to harm shrimp or shrimplets. Seachem’s medicine does not contain formaldehyde or methanol and it will not change the pH of your water.

The bad thing is that ParaGuard does not take care of the eggs as well. In some cases, people use ParaGuard after salt treatment just to make sure and reduce the chances of spreading the disease. Unfortunately, it is very pricey.

*WARNING: Although even advanced shrimp breeders recommend using it, nobody says that Seachem has admitted that the Paraguard is not invertebrate-safe.

Quote “ We do not sell or market ParaGuard™ as invert safe because it would be impossible to test it with every available invert under every potential water parameter. We have had people use it with invertebrates with no problems, but we have also had people encounter problems. If you decide to use it we stress caution; dose at 1/4 to 1/2 dose and observe how your inverts and soft corals react. If they seem to tolerate the dosing, increase slowly up to no more than the prescribed dose as long as they are tolerating it. If you need to get rid of the ParaGuard™quickly, just turn your skimmer back on.” 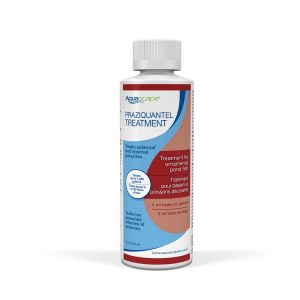 This is another way to treat the whole tank. Although the product was not designed for aquarium purposes, it still gives great results against parasitic worm infections like this one.

There is no need to repeat it more often. The medication is quite powerful and at the same time, it is quite safe for the shrimp.

Tip: during the treatment, it is advisable to maintain strong aeration. Praziquantel is a drug that consumes a lot of oxygen, so if you have CO2, you will have to monitor it closely.  Read more about it in my article “CO2 in a Shrimp Tank”. There is no information on the internet on how this medicine can affect snails. I would just take them out to be safe. 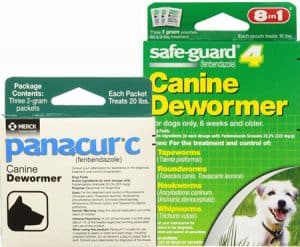 Yet we see another medicine (Panacur C and Canine DeWormer (link to check the price on Amazon)) which aquarist use at their own risk. It is almost the same as with planaria treatment. Be careful with snails if you have them and they are part of your eco-system. Because Fenbendazole can be lethal for them. 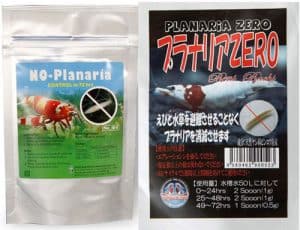 These are the last products in my list, which can remove the disease according to SKFA members (Shrimpkeeperforum.com). Frankly saying, they are less popular and there is no much information about dosage for our cases.

Nonetheless, I want to tell you guys about all the methods which worked for different people. Because sometimes even the most popular ones may not work for you while the rest will.
Suggested dosage and usage:

Tip: Better to remove your carbon filter before dosing.

Benibachi Planaria Zero – link to check the price on Amazon.

When the shrimp molts the parasites or eggs are generally attached to the molts rather than the shrimp themselves. That is how they spread.

You will have to remove the molts as fast as it is possible from the aquarium for at least 2 or 3 weeks in a row after any treatment. If you cannot stay around your aquarium all the time do it at least twice a day in the morning and in the evening.

Otherwise, once the eggs on the shrimp molts are hatched they will re-infect the entire colony again.

Tip: do water changes on a day when you know that you are going to be home during the next few days. For example, if you plan to stay at home during the weekend, you can do the water change on Friday. The thing is that water change is one of the triggers for the molting process of the shrimp. Because it is a stress for the shrimp. Thus, there is a higher chance of shrimp molting during those two days when you are home and you can remove these molts almost immediately.

Tips for Prevention of the Disease

The information has been taken from magazines, forums, blogs, documents from American, German, Russian, and Spanish shrimp breeders. I tried my best to find all these treatment guidelines that have given me the most confidence and I cannot be held responsible for any problem which can arise.

Because their effectiveness (or danger) may also depend on other parameters such as water conditions, the global state of our shrimp, conditions of maintenance, other chemicals present, etc … I have limited myself to verify the most frequently mentioned and most valued, nothing more.