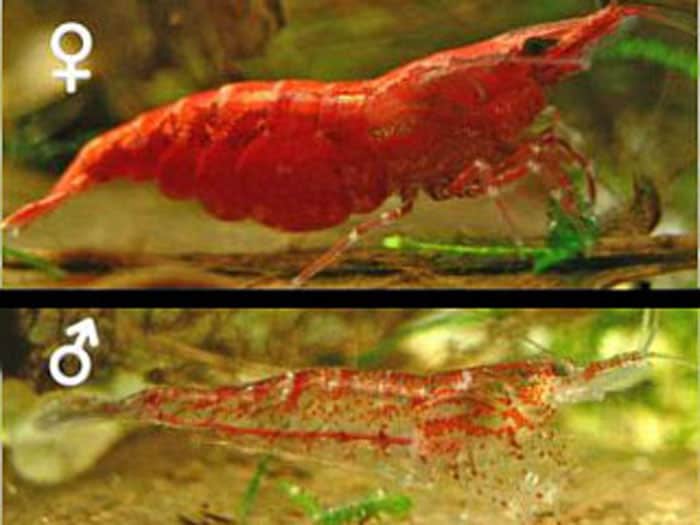 I suppose I should begin by highlighting the fact that dwarf shrimp gender is a very popular question on Internet forums. People wonder, how can they tell the difference between a male and a female shrimp? They put their pictures and ask for help.

Actually, the short answer is that there are several signs, which can help you. These are the size of the shrimp, the curves of their body, presence or absence of the saddle, the length of the antennas etc. Nonetheless only one of them is 100% correct.

So, let us talk about this topic and look at every gender difference in details.

The first thing I should mention is that the females are larger than males. For example, the average size of the adult Red cherry female is about 1″ (or 2,5 cm), the males are usually 2/3 – 3/4th  of an inch. (1,5-2 cm). Males are also slimmer than females.

Note: Neocardinias and Cardinias can have different sizes in some cases.
This method is not completely reliable. It is very easy to confuse a young female with a full-grown male. That is why it is advisable to use it only with combination with others.

2. The saddle and the Eggs 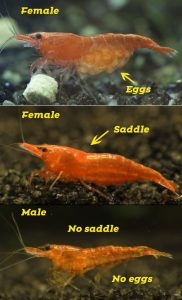 The more reliable indicator of gender is the presence of what is known as the saddle. The saddle consists of small undeveloped and unfertilized eggs forming in the female’s ovaries. If you can see a saddle. You can be 100% certain you are looking at a mature female.

The saddle is usually white and might have a yellow dent. Actually, it depends on the species, for example, Ghost shrimp have a greenish color dent. It is located on top of the shrimp between the head and the abdomen.

This way of identifying the shrimp’s eggs is relatively easy if you can see through the shrimp’s exoskeleton. However, what if the shrimp has a dark skin pigmentation that hides the saddle?

Some shrimp breeders say that you can shine a specific light on the shrimp from the bottom in a specimen container and you will see a dark spot where the saddle should be. At the same time, they do not advise to do it if you are unexperienced shrimp keeper.

The two shrimp on the top of the photo are all female. The one on the top does not have a saddle because the unfertilized eggs have already been fertilized and moved to a stomach. The white and yellow part is actually unfertilized eggs. The shrimp at the bottom has no saddle and now eggs in his belly and is clearly a male shrimp.

3. Belly and Back Curve. 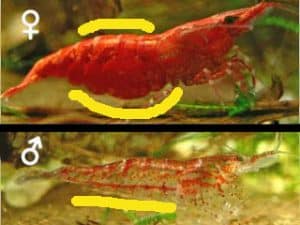 Females of the dwarf shrimp tend to have bigger and rounder underbelly (abdomen) whereas the males do not have a curved abdomen. It has a more-like triangular or straight shape. Males do not need the extra space underneath to store their eggs.

This area is also known as the undercarriage. Researchers believe that the low-slung and curved undercarriage of the female is nature’s way of adding an extra measure of protection for the developing eggs.

In addition, if the female was berried before (at least once), her belly will be very round compared to the male shrimp flat belly. It happens because the abdomen expands during a pregnancy process and will not return to its flat shape.

The belly curve also affects the shrimp’s back. In order to hold better the eggs, the females bend their back a little bit. As with belly, it does not return to its previous form.

The females have slightly rounder back than the males but only well-trained eyes can clearly see the difference.

The curvature of the undercarriage and the back of the shrimp cannot guarantee the gender.  You need to have well-trained eyes to clearly see the difference. 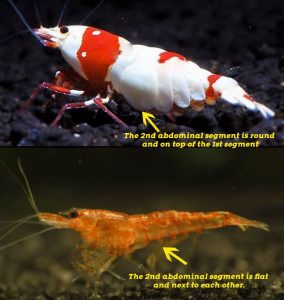 Look at the picture. The second scale of the females will most likely look like it sits on top of the first and third scale whereas with the male it will look like they are next to each other. Also, because the male’s tail, not being needed to carry eggs, is narrower. 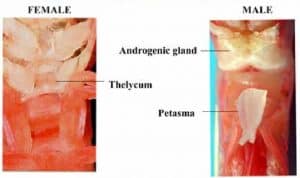 Another way to determine gender is to look at a feature known as the swimmerets. Shrimp have well-developed pleopods (swimmerets) and slender walking legs.

The muscular abdomen separated into 6 segments. The first 5 segments have a pair of appendages on the underside, which are shaped like paddles and are used for swimming forward.

The appendages are called pleopods or swimmerets and can be used for purposes other than swimming.

The female dwarf shrimp use them to hold the developing eggs in the undercarriage and for fanning eggs. The males use the first 2 pairs for insemination.

These first 2 pairs of swimmerets contain specialized reproductive structures used in the production and transfer of sperm. The first pair is known as Petasmas. They are smooth and shaped like baseball gloves with a rod-shaped organ in the center. The second pair is known as the appendix masculine. These are shaped like spheres and covered with bristles.

It really depends on the experience of the shrimp breeder unless special equipment is used to look closely at the pleopods.

This is another way to distinguish between males and females. However, do not rely on color alone. But with some dwarf shrimp species, it can work. For example, cherry shrimp. The cherry females usually have more red than the males. Males are less colorful (pale or even almost transparent color).

Keep in mind that under stress or unsuitable conditions, the females can temporarily lose the density of the color. In addition, this method will not work at all with high-grade Neocaridinas, because both the males and females will often feature opaque coloration.

Another way is to look at their antennas. Shrimp have 3 sets of antennas:

These shorter antennas shrimp also use to find food close to their mandibles (mouth) and to detect danger in front of them.

Anyway, they also acknowledge that this is a very hard method to distinguish between the male and the female shrimp to the untrained eye. It is pretty difficult to spot. Especially, because shrimp defer in species and size. It may only work if you compare shrimp that are more or less the same age.

Sometimes people say that the behavior of females and males is different. Males are more agitated whereas the females are calmer and slower. When it is mating time, the males do behave restlessly. Nonetheless, in all over cases, this method is completely unreliable. Stressed females start to rush around the aquarium like crazy as well.

At what age is it possible to distinguish the dwarf shrimp gender?

It depends on the way you want to do it.

Special tools detection
Bear with me a little bit here, if you want to nerd about it.

First of all, there was the study, where scientists investigated the time in days when it is possible to differentiate the sexes. The time when females begin to develop gonads and subsequently become ovigerous. (*Post-hatching development of the ornamental “Red Cherry Shrimp” Neocaridina davidi under laboratorial conditions” Article in Aquaculture Research. October 2015)

In my article about “Breeding and Life Cycle of Red Cherry shrimp” I also wrote that sexual dimorphism is not clear during the early stages of development. From stage S7 (~15 days old shrimplet) onwards, the sex could be determined despite its inconspicuous characteristic. Thus, measurements of stages S1 to S6 were classified as “non-sexed post-hatching stages”. 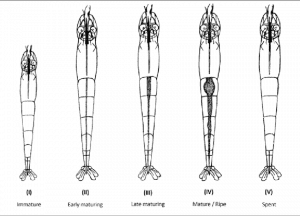 Females with developing gonads were detected from stages S11 to S13 (~30-40 days old shrimplets). The gonads of the females began developing 30 days after hatching (36.6 ± 5.9 days). During the gonad development phase, the females did not molt.

Shrimp gonads are paired, elongate organs located in the thorax and/or abdomen. The oviducts are tubules, usually terminating on the last pair of walking legs for males and the third from the last pair in the females. A gonad-stimulating hormone,

produced in the thorax stimulates egg production, and once the ovaries are fully developed (and the males are ready to copulate) some crustaceans release chemical signals called pheromones into the water to attract potential mates

When the female gonads are fully developed, the “pre-mating molt” occurs and it is followed by mating. The first female with embryos was recorded 49 days after hatching (55.18 ± 4.46). 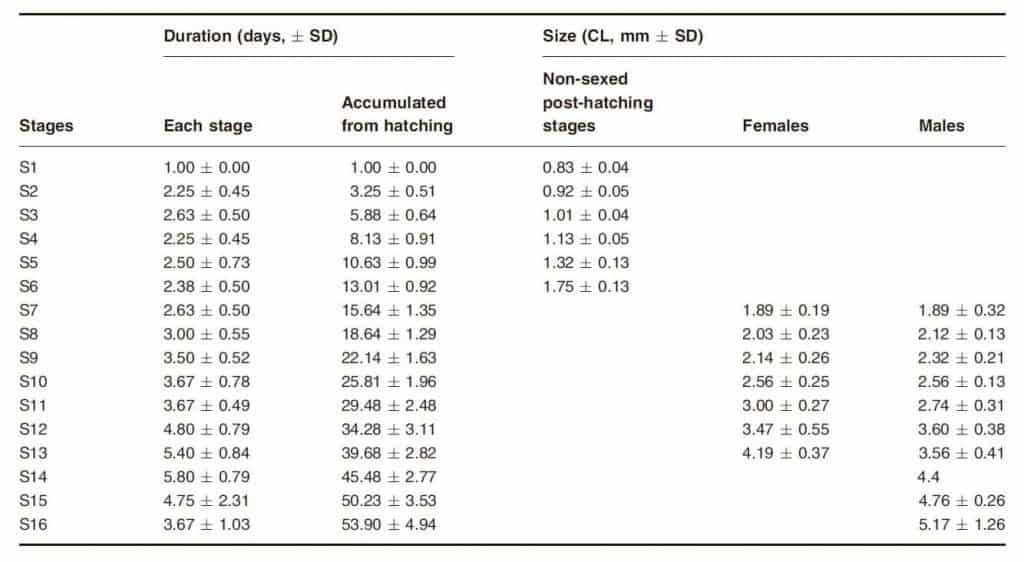 In the next five stages, the number of plumose setae on the endopod is reduced.

The appendix masculina appears from the seventh as one small plumose seta situated between the appendix interna and the endopod. This appendage grows as the development advances and the number of setae also changes.

Regarding the female first pleopod (except for small variations in the amount of setae) there is no difference at the exopod. However, the endopod of the female lacks the characteristic internal appendage and small spines of the male. The numbers of the plumose setae and the simple setae on the endopods of females gradually increase throughout the stages.

The endopod of the second pleopod remains slightly growing in the sixth post-hatching stage.

For females, except for small variations in the amount of setae and the absence of an appendix masculina, there are no differences on the exopod and the endopod respectively.

There is only one way, which can give us an absolutely correct way to distinguish the gender of the dwarf shrimp. It is the saddle or the presence of the eggs. The rest ways (color density, size, curves, antennas, etc.) cannot guarantee anything unless you are an extremely experienced shrimp breeder. In any case, it is advisable to use them only in combination with others.

If we are talking about the most popular cherry shrimp. The sex determination of the Red Cherry Shrimp is quite obvious when they are 2 months old. The females are larger compared to the males, have a more intense red coloration, and also have a curved abdomen. The male shrimp have a very pale red coloration and has a straight lateral line with no curved forms.