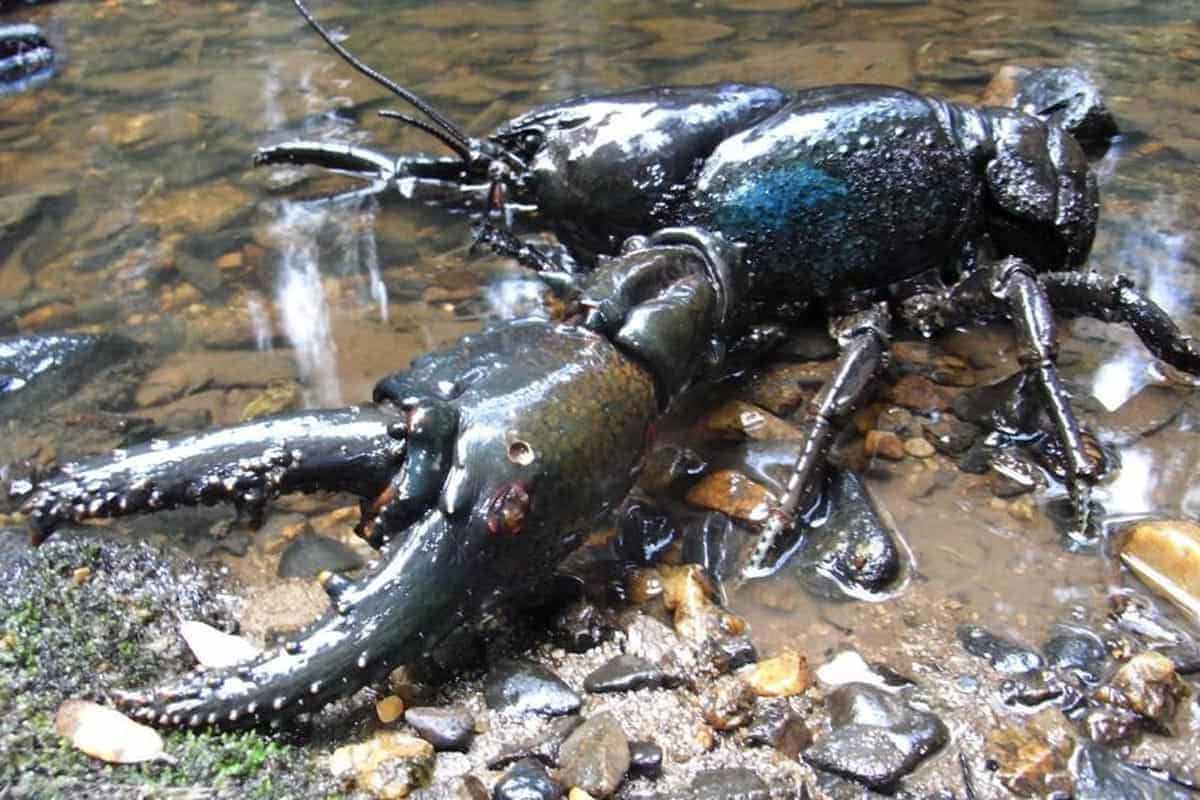 I’m not sure anyone would behold the Tasmanian giant crayfish without making comments on its bizarre look and whopping build that surpasses the size of every other known crayfish— after all, this species is the world’s largest crayfish.

The Tasmanian giant crayfish is equally noted as the largest freshwater crustacean/invertebrate on earth, and it can live for 40 years! You would agree that not so many animals can achieve such a feat, thus the Tasmanian crayfish is truly fascinating.

Keep reading for more information on the Tasmanian giant crayfish; this includes extensive details on its taxonomy, description, habitat, and reproduction. 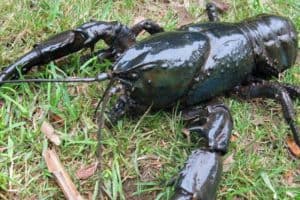 It should be noted that a Melbourne naturalist, Ellen Clark, was the first to formally describe the Tasmania giant freshwater crayfish. This event took place in the year 1936 when Clark published a revision of the nomenclature of stream-dwelling and land crayfish of Australia.

Before this comprehensive revision, all three Tasmanian crayfish of the genus Astacopsis were collectively known as Astacopsis franklinii.

Interesting fact: The binomial name Astacopsis gouldi was assigned to the crayfish to honor a member of the Royal Society of Tasmania and the first Tasmanian Government Geological Surveyor Charles Gould, who published observations on the crayfish’s distribution, diet & habits in 1870.

This is contrary to the belief that Astacopsis gouldi was named after the convict artist William Buelow Gould who painted a representation of the Tasmanian freshwater crayfish in his work “Sketchbook of fishes”.

Furthermore, in Tasmanian Aboriginal language program (palawa kani), the Tasmanian giant freshwater crayfish is referred to as lutaralipina, a name that the earliest members of the Cape Portland tribe from Northeast Tasmania used to describe the giant crayfish.

The scientific classification of the Tasmanian giant Crayfish is as follows:

The Tasmanian giant freshwater crayfish is endemic to rivers and streams of northern Tasmania.

This crayfish species naturally occurs at altitudes below about 400 m (1300 ft) and distributed across Arthur River and all other rivers and creeks draining into Bass Strait; including Cam River, Forth-Wilmot River, Inglis River, and Mersey River catchments with the exception of Tamar River catchment.

This species has also been introduced into the North Esk catchment (St Patrick’s River) and the Derwent catchment (Clyde River) where its populations have become established.

The habitat is characterized by the abundance of riparian vegetation which forms a dense canopy and shades the waterways.

The preference of juveniles to faster-flowing parts of rivers and streams helps them to escape predators. Both adults and juveniles seem to like well-shaded areas, cooler temperatures, clear water, and high levels of dissolved oxygen. 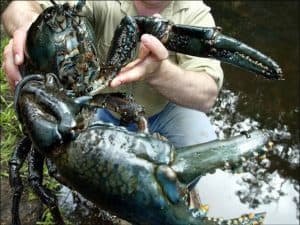 Moving on to the physical attributes of the giant crayfish, there are records of specimens reaching a massive size— over 80 centimeters (31 inches) long and attaining weights of up to 6 kg (13 Lb). Though in recent years, the majority of larger specimens weigh between 2 – 3 kg (4.4 to 6.6 lbs).

The crayfish is slow-growing and long-lived; capable of living up to 40 years in its natural environment. The maximum size is estimated to be reached at 30–35 years of age.

In terms of coloration— there are variations among individuals, with colors ranging from dark brown-green to black; blue morphs are often found among adults.

Other prominent physical features include: a dorso-ventrally flattened & spiny body, a pair of large developed chelae (claws), walking legs, carapace, and abdomen ending in a tail.

Note: According to the study, large males can have claws that are as large as a man’s hand, and are capable of breaking and crushing bones.

The Tasmanian giant crayfish can be territorial, with the male securing a secluded area within the habitat and gathering a harem of several females.

Adults often dig burrows in stream banks and underneath logs and boulders in the streambed.

The species exhibits two prime behavioral/movement patterns in the wild— periods where the crayfish is inactive (between one and 10 days), or engage in short travels, after which it returns to the home site.

In addition, the crayfish also migrates long distances, often taking up residence in a new home, or eventually returning to the initial home site. There is a reported case of a specimen traveling over 700 m in a single night, besides, the species has also been observed to walk on land.

The large size of the adult Tasmanian giant crayfish makes it safe from predators such as the Australian bass, platypus, and rakali which often attack smaller species of crayfish. However, juveniles will conceal themselves behind large rocks, cavities, and submerged logs in the water if need be.

Freshwater crayfish and other crustaceans are usually reported as being primarily nocturnal animals. Nocturnal activity is often attributed to the avoidance of diurnal predators. Well, it is not so with the adult Tasmanian giant crayfish.

Maybe because of their large size, but these animals do not appear to follow any diel rhythm in their activity patterns.

This species displays a shift in dietary preferences with age. Juvenile crayfish have a higher animal content in their diet.

You can learn more about it in my articles:

Freshwater crayfishes grow by periodically shedding their highly calcified exoskeleton. That is why the molting process (the molt cycle) is the most important part of a crayfish’s life.

This process has 4 phases:

Note: The frequency of molting and the molt increment are influenced by various environmental factors such as water temperature, food availability, reproductive condition, and the size/age of the Tasmanian giant crayfish.

The inter-molting periods can be short (weeks and months) when the crayfish is young. As the Tasmanian giant crayfish ages, these periods will begin to happen further and further apart. For example, adults molt once a year.

During pre-molting periods, most metabolic activities are reduced to a minimum. They stop eating, become very sluggish, and spend most of their time sitting still in its shelter.

It may take a lot of time to prepare for molting. For example, adult Tasmanian giant crayfish starts its preparation 35 – 40 days prior to molting.

Molting is the most stressful moment in their life. Several days following the molt the crayfish is inactive while its new exoskeleton hardens. They are completely vulnerable and helpless during and after molting.

The claws, walking legs, and feeding appendages are calcified first with the rear of the carapace being, last to harden. About 6 to 10 days after the molt the Tasmanian giant crayfish begins feeding again.

Important: Keep putting and replacing food in the tank! You never know when they can come up from the molt. Give them something that is rich in calcium. They definitely need calcium after the molt. Also, do not remove the old exoskeleton from the tank. It contains lots of minerals and your crab will eat it later.

For more information, read my article “Crayfish and Molting Process”.

A recent study of the aquaculture potential of Astacopsis gouldi has found it “not a suitable animal for intensive farming” due to slow growth rates and intolerance of elevated temperature.

In addition, this species is unavailable in the aquarium trade due to a ban that prevents its fishing and trade, as a result, the crayfish is seldomly bred in home aquaria. Under Tasmanian legislation, a permit is required to catch this species, and illegal fishing carries a fine of 10,000 Australian dollars.

As a general rule, the Tasmanian giant crayfish requires well-vegetated forest streams (weed bed and riparian) with low turbidity and even temperatures.

Generally, this species prefers water temperatures of less than 18 ˚C and oxygen levels greater than 7 mg/L and notes that they are sensitive to sedimentation

As for captivity, a relatively large aquarium is needed and the crayfish must not be housed in tanks lesser than 50 gallons (200 liters) because of their big size. Additionally, this crayfish would be better off alone in a separate tank than in a community tank to avoid bouts with smaller inhabitants.

The Tasmanian giant crayfish need driftwood and lots of fresh vegetation in the tank, with hardy plants that can thrive in low-moderate lighting, examples are Java fern, Anubias, Java moss, Hornwort, in addition to plenty of rocks, cobbles, and caves. You can even form dense overhangs & walls using java moss to make the environment a bit shady and provide extra comfort for the crayfish.

Note: The only problem is that the crayfish will eat or cut the plants.

The Tasmanian giant crayfish are sexually dimorphic. There are a few indicators that give away the gender of the animal.

The growth and breeding habits of the species are poor.

They tend to mature quite slowly and possess low breeding potential. This is evident in their development; females reach sexual maturity at 14 years, having a carapace length of about 119 mm (4 – 5 inches) and an estimated weight of 550 g (1.2 Lbs).

Females are known to mate and spawn biennially in autumn, typically after a summer molt. Gestation of the Tasmanian giant freshwater crayfish is about 9 months, with females carrying the eggs on their tail through winter.

The young attaches itself to the pleopodal setae by specialized hooks on the tips of its fourth and fifth pereiopods.

At stage 3 young crayfish start venturing away from the mother after 28 days but most returned to reattach to her abdomen. They become truly independent only after the molt to stage 4 (about 7 mm or 0.28 inches carapace length).

The Tasmanian giant freshwater crayfish is unarguably one of the most remarkable and captivating creatures on earth, but sadly, factors like habitat degradation and overfishing/poaching hugely threaten the existence of this species.

With poaching made illegal in the area with fines of up to $10,000 payable by guilty offenders, we can only hope that this ban in conjunction with other effective measures will ensure the future of the Tasmanian giant crayfish.

Due to the declining population of the giant crayfish and ownership only possible through a permit granted by the Tasmanian authorities, there is absolutely no chance of encountering the species in the aquarium trade.

With continuity in mind, the conservation of the remaining population and improvement of its natural habitats is paramount at this point in time.

1. A revision of the Tasmanian freshwater crayfish genus astacops/5 huxley (decapoda: parastacidae). Papers and Proceedings of the Royal Society of Tasmania, Volume 126, 1992.

2. Astacopsis gould/ clark in streams of the Gog range, northern Tasmania: the effects of catchment disturbance. Papers and Proceedings of the Royal Society of Tasmania, Volume 129, I 995.

8. Juvenile Astacopsis gouldi in headwater streams –relative abundance and habitat. Report to the Forest Practices Board. 2004