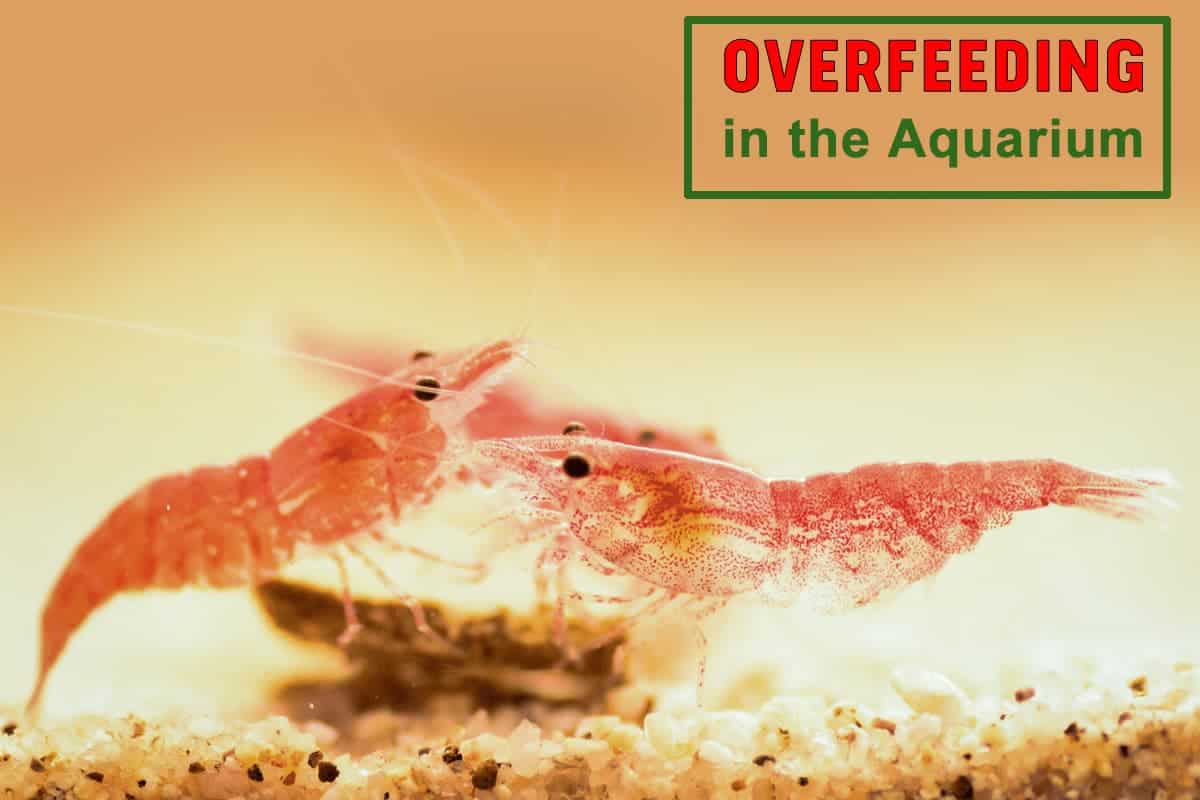 One of the most popular errors made by primarily new aquarists is overfeeding. Lots of people have a hard time determining whether their fish, shrimp, and other aquatic pets are eating enough or getting too much food.

Nonetheless, there are serious consequences attached to overfeeding them. It is important to understand that overfeeding our pets deteriorates water quality, causes infections, and diseases and in general, puts them in danger of serious health conditions.

As we progress in this article, you will see the consequences and differences of overfeeding for fish, shrimp, and other crustaceans.

By their nature, most fish species are incredibly opportunistic feeders, eating whenever they get the chance. That implies that if you give them food, they will generally eat it even if they aren’t particularly hungry.

Many fish keepers continue feeding their fish frequently since they tend to keep eating, which results in overfeeding.

Overfeeding fish definitely comes with many consequences. They are not just on the fish but also on the fish pond, or aquarium, as the case may be. Of course, the myth of the fish exploding is just that – a myth, but other consequences include:

The Unhealthy State of the Water Quality

If the fish don’t consume all of the food you feed them, the food in the tank will begin to decay.

Therefore, ammonia, nitrites, and nitrates, the chemical byproducts of organic waste (such as rotting food) breaking down in your tank, build up as a result.

These compounds are very toxic to fish and can potentially kill them at high concentrations. Furthermore, uneaten food left in the tank to decompose might reduce oxygen and pH levels.

According to multiple studies, overfeeding has been linked to various health issues, including poor digestion, fatty liver, fin rot, and many others.

For example, fatty liver is a hepatitis-like condition that primarily affects croackers, cichlids, and other meat-eating fishes. Other resulting effects include fin rot, which affects the fish’s fins and body over time.

A polluted tank would be the likely outcome as well because fish create more waste than usual due to improper digestion.

Negative Impact on the Fish Tank

Overfeeding would suggest that there would be leftover food flakes or crumbs floating about in the tank’s water.

Moreover, unwanted algae will develop due to the increased toxicity and decreased oxygen levels, the fish tank water will become murky, and routine tank maintenance will become tasking.

Both bladder snails and pond snails proliferation can be triggered by overfeeding since they have access to ample meals to gobble down for their nourishment.

Dwarf shrimp are popular invertebrates because they have a reputation for being amazing aquarium cleaners.

Shrimp will eat practically any organic material they can get their tiny claws on such as decaying matter, biofilm, detritus of any type, rotting leaves, vegetables, algae, fish or snails waste, dead fish, and even other dead shrimp. This means that shrimps can ingest both plant and animal materials, making them omnivores.

Well, being scavengers do not mean that they can eat 24/7. Dwarf shrimp also have their limits and overfeeding them is one of the biggest causes of their death!

The wide variety in their diet makes it almost too easy to overfeed shrimp. But like their tankmates “fish”, there are consequences in overfeeding shrimps. These consequences include:

Uneaten food can swiftly disintegrate, resulting in an illness or parasite epidemic.

If you overfeed your shrimp — Scutariella Japonica, Planaria, Vorticella, Hydra, Cladogonium ogishimae or Ellobiopsidae, Rust disease, or fungus will most likely wreak havoc in your tank at some point.

Accumulation of Ammonia, Nitrites, and Nitrates

As with fish, uneaten food and organic waste are the primary sources of ammonia, nitrites, and nitrates. All these chemicals are very toxic to dwarf shrimp. They are more sensitive than fish.

Ammonia, nitrites, and nitrates poisoning is a severe condition that plagues aquarium animals.

They have desired PH levels essential to their survival.

The decomposition of organic material, that is, decaying leftover foods also reduces the pH of the water since acids are formed in the process, which is harmful to the shrimp.

Crayfish and crabs are very hardy animals and overfeeding does not affect them directly. It is all about water quality!

Although crabs and crayfish can withstand huge fluctuations in water parameters, bad water quality leads to all major groups of disease-causing agents, including viruses, bacteria, fungi, protistans, and metazoans.

Therefore, overfeeding can also be a problem for these animals.

Overfeeding is not only bad for their health, but it also puts a strain on the tank’s filtration system, resulting in poor water quality.

Uneaten food and debris can build up on the filters, clog the functional media and slow them down, thus restricting their capacity to work efficiently.

When you fail to get rid of decaying food particles that these crustaceans ignore, the filter may get overwhelmed from excessive amount of waste and consequently.

The quality of the water may deteriorate to the point where even their hardy nature will not be able to save them.

How to Avoid Overfeeding Your Fish, Shrimp, Crayfish, etc.

The consequences of overfeeding are both dire to the animals and the finances of the aquarium keeper. To avoid them, it would be best to prevent this practice.

First of all, do your research about particular fish species that you have. You need to know their feeding behavior, feeding habits, and feeding patterns. For example, there are 3 main eating groups among fish:

In addition, we have:

Moreover, some fish species can be very shy and easily outcompeted for food by other species.

For example, generally, top-dwelling fish should be able to consume all the food at the sinking rate. In other cases, it can be recommended to give them the customary quantity and see if they eat it all in 4 or 5 minutes.

Kindly reduce the quantity of food you give the fish gradually until they finish the meal in the allotted time. If any food is left in the tank, use a net or siphon to remove it.

Set up a feeding plan and adhere to it once you’ve determined how much your fish should be fed. Some fish require only one daily meal, while others may require several smaller feedings dispersed throughout the day.

Overfeeding shrimp is not a good idea as well. This is a general rule that applies to all types of shrimp.

Unfortunately, many beginner shrimp breeders overlook it or believe that a bit of extra food isn’t a big deal. They are wrong!

Shrimp are slow eaters. In addition, they can jump from one food to another. They are almost always eating something.

Therefore, the optimal dose is usually determined empirically. Based on shrimp reaction, they need to eat the food in 2 – 3 hours. Leftovers must be removed.

Do not worry, shrimps can easily survive without food for a few days before it starts to take a toll on their health and general wellbeing.

For Crayfish and Crabs

Many factors cause the overfeeding of these crustaceans. Some aquarists tend to feed the crayfish very large portions because it’s a heavy eater — which is not advisable, while others feel the urge to feed them multiple times daily.

Personally, I would say that the pieces of food should be no more than 1/3 – 1/4 of their body.

Also, leave their food in the tank for 10-12 hours before removing it.

We all want to do the best thing for our animals, but overfeeding is a bigger issue than you might think.

I have listed only some of the known consequences of overfeeding fish, shrimp, etc. There are other probable consequences, and while they may not be lethal or immediate, they do have adverse effects on their life quality.

Feeding is arguably the most important variable in the course of pet keeping. There is joy in watching your pet delight in dinner. Ideally, we have to find a fine line between overfeeding and underfeeding, and for that, we need to know as much as it is possible about their feeding habits and preferences.