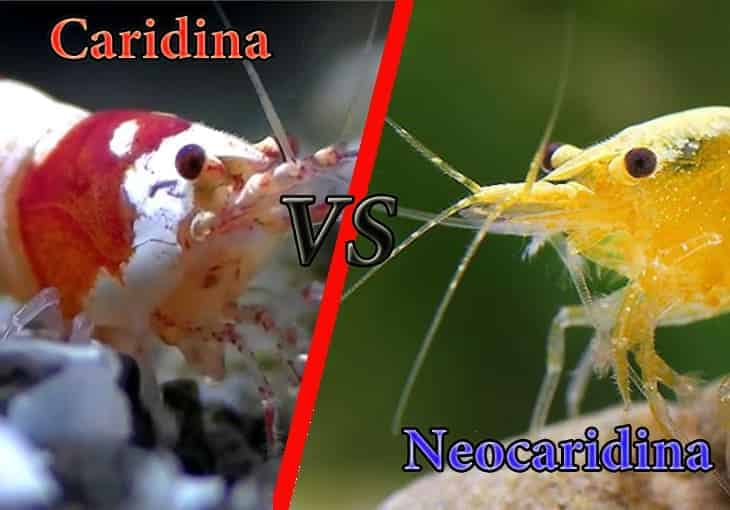 The question of the visual difference between Neocaridina and Caridina shrimp arises all of the time. I have seen countless posts on forums where people have had problems with distinguishing Neocaridina from Caridina shrimp. This may, at first sight, appear as a simple question but it is not. The problem is much more complex and I will tell you why. However, before I start ranting I can tell you the differences between Neocaridina and Caridina, these are:

Endopodite of first maxilliped without protuberance on its distal outer margin.  Endopodite of first pleopod greatly enlarged and pear-shaped in male, subtriangularly elongated in female. Appendix masculina of second abdominal appendage much enlarged, thickened and densely covered with setae.

I bet that most of you did not expect this answer, like what is this?! Frankly saying, me too… at first. 🙂 Do not worry I will explain it with pictures. Nonetheless, this is the only scientific explanation which you can find. Believe me, I have done my research, just keep reading and you will see it yourself.

When I first got into this hobby, I also tried to find the difference between Neocaridina and Caridina. Like many others I wanted to hear the simple answer, like – the rostrum has another shape, the carapace is thicker/thinner, color, etc. All in all, is it possible to differentiate between these 2 genera by visual appearance?

Unfortunately, nobody could really answer the question. The situation is pretty hilarious, we have shrimp in our tanks, but in reality, we have no idea about their genus! Are they Neocaridina or Caridina? We have to trust to… and who actually can we trust?

I dropped this subject for some time. However, this question kept bothering me again and again. So, eventually, I decided to look at this problem more meticulously.

History of Search between Neocaridina and Caridina

Here is my rant so bear with me. I already knew that forums, YouTube and Facebook groups cannot help me because people did not have any real data about this matter. Of course, from time to time there were some links and references to German sites, which supposedly described the difference between Neocaridina and Caridina but these links were dead as well.

Note: There is only ONE very short article in the English segment of the Internet about this problem (I have not found a single one in German, Russian and Spanish segments at all!). Unfortunately, that article did not provide any links to the sources. So, of course, I thought that maybe I would be able to find something else myself (and, actually, I did).

I started from scratch by finding the very first and then the modern studies about Neocaridina and Caridina. Some of these studies can be found online, while to get other I sent requests. I even tried to look into studies of DNA sequences of Neocaridina denticulata vs Caridina leucosticte, as examples. Frankly saying, I did not understand much about DNA besides that “Recent molecular phylogenetic analyses have shown that the genus Neocaridina and the genus Caridina are very closely related within the family Atyidae”. That is why I returned to standard studies of these species.

First Studies of Neocaridina and Caridina

Bouvier, Kemp, Haan, Kubo, De Man and Holthuis had been the pioneers to study on Atyids.

In 1918, Kemp (“Zoological results of a tour in the Far East”) did not see any difference between these two genuses, as well. Even more, he wrote “Classified according to the scheme outlined by Bouvier in 1913, C. denticulate would find a place alongside with Chinese C. davidi, Bonvier. Balss regards the latter species as synonymous with the former, but in this he is certainly in error. C. davidi, co-types of which are in the Indian Museum, differs in many respects from C.denticulata and may be distinguished at a glance by the depressed rostrum and by the strong curvature of the propodi of the last three pairs of legs”

Note: However, according to the modern Taxonomy, modern biologists consider them as the same species.

Note: Well, one hundred years later, he is still right! Unfortunately, I cannot give any link to this book. Nonetheless, if you are interested, feel free to ask me, and I will send it to you in pdf format.

However, it did not stop Kubo to propose that the difference in the structure of the genitals can be the sign of a different genus. In his work he had prepared a new genus – Neocaridina – separated from Caridina by three characteristics, and reported about the Neocaridina denticulata study of the material with special reference to the features of pleopods. Thus, it allowed him to make emendations and additions in regard to atyid taxonomy. This was the day when Neocaridina was “born” from Caridina.

Kubo wrote “The present genus is closely allied to the genus Caridina but differs from it by the following important characters:

About Differences between Neocaridina and Caridina in Details

What do they mean? In order to have a slight understanding let’s take a look at the pictures. 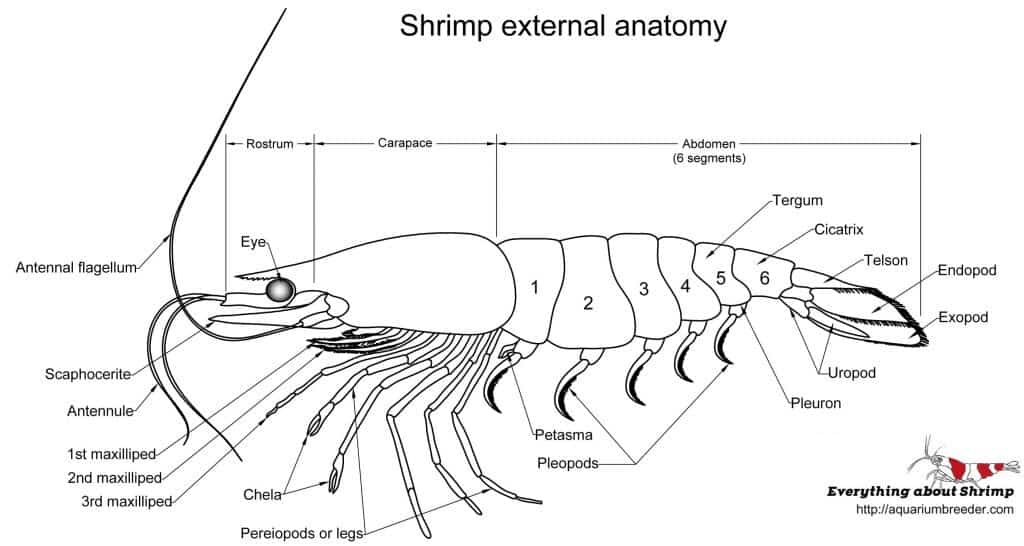 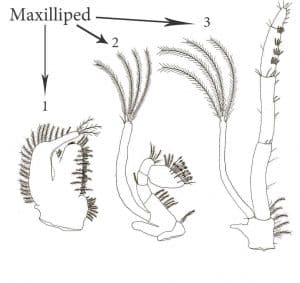 Maxilliped – One of the mouth appendages on the heads of the shrimp, used for feeding. Called also jawfoot, and foot jaw Origin: [Maxilla + L. pes, pedis, foot.] 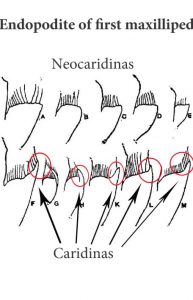 Endopodite – the inner branch of the biramous limb or appendage of a crustacean. 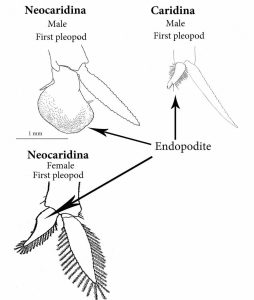 In Caridina the endopod is more “leave” shaped and in almost all species this appendage is tapering towards the distal end. The appendix interna (if present) is located near the distal end of the endopod. 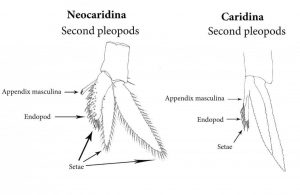 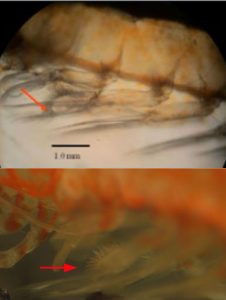 Modern Studies of Neocaridina and Caridina

Since then (1938), Kubo’s revision has long been the subject of debate, but in 1966 the species was finally separated by Cai Yixiong  in “A revision of the genus Neocaridina”.

Note: Unfortunately, the most part of that study is written in Chinese. However, according to different translations, the reasons for differentiation Neocaridina from Caridina were the same as mentioned above (more or less).

The Taxonomy of Neocaridina and Caridina shrimp

After all these searches I was disappointed a little bit. I tried hard but the results did not satisfy me so I decided to look at the problem from another angle. Thus, I asked myself – what criteria do biologists use for genus classification? What else do they use in general? Therefore, I started looking in this direction.

John Lindley provided an early definition of systematics in 1830. In 1970, Michener defined “systematic biology” and “taxonomy“. The composition of a genus is determined by a taxonomist.

Once again I was in for an unpleasant surprise. The point is that the standards for genus classification are not strictly codified, so different authorities often produce different classifications for genera.

In 2012 Nicholson, K. E.; Crother, B. I.; Guyer, C.; Savage, J.M. in their work “It is time for a new classification of anoles (Squamata: Dactyloidae)” wrote “Which species are assigned to a genus is somewhat arbitrary. Although all species within a genus are supposed to be “similar” there are no objective criteria for grouping species into genera”.

That is why in some studies, biologists “adopt the simple binomial nomenclature to treat all subspecies to a specific level for convenience, because some taxa have been inconsistently ranked as species or subspecies, whilst some subspecies were ranked under different species in Cai (1996) and Liang (2004).

It is absolutely not possible for you to see the differences between Neocaridina and Caridina with your bare eyes. The morphological differences are too small and you would need the help of special literature and a microscope to see them.

As a result, if you see that somebody says that Neocaridina and Caridina are different because they have different rostrum shapes, color, antennae, body size, etc., this is just a pure guess. Therefore it is not trustable and reliable.

Another problem is that Taxonomy classification is also changing all the time. Today it can be Caridina and tomorrow it is already Neocaridina.

25 thoughts on “The Difference between Neocaridina and Caridina Shrimp”