People usually keep pets like cats, dogs, hamsters and fish etc. but the unconventional ones are dwarf shrimp, mantis shrimp, hermit crabs, tarantulas, praying mantises, snakes, huge land snails and even scorpions. Yes, you read it right. People like to keep scorpions as pets. As impressive as it may sound, it takes lots of courage and a particular interest in this creature to keep it as a pet.

You must be wondering how difficult it must be to keep a scorpion in your home aquarium (vivarium). Well, it’s not very difficult but pretty interesting. Scorpions are not messy like any other animal. They are very clean and quiet as compared to other pets. They are low-maintenance, which means it won’t cost you an arm and a leg to keep a scorpion pet.

All of these species cannot be adopted as pets. There are about 30 to 40 species which can kill a human being through their venom. The species which can be adopted as pets are not that dangerous. In some cases, their sting is similar to that of a bee but it but different reactions can occur in different people. That is why the main thing about having a scorpion pet is that you never get to hold it. They are not pets to play with.

Because they can sting, they are mostly kept in tanks from where they cannot sneak out. Scorpions are just fun to watch. They can be adopted easily, and it’s not difficult to take care of them.

Here is a guideline about different types of scorpion species which can be adopted as pets. Knowing the species before taking a scorpion as a pet is essential because you might be getting the wrong type which can turn out to be life-threatening for you in case it stings. 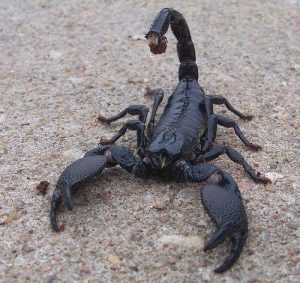 If you are a beginner and you are looking for a scorpion pet, then this specie is the right option for you. Emperor scorpion is recommended all over the world to be kept as a pet because it is one of the docile species of scorpion.

Emperor scorpion is generally calm, and it will not sting until it feels threatened. These scorpions are hesitant to sting; they will usually pinch you with its claws. The venom of Emperor Scorpions is mild and will not cause any allergies. People who have been stung by this specie have been reported to have localized reactions and nothing serious.

Emperor scorpions are carnivores like all other scorpions. If in captivity they eat the following:

An adult scorpion should eat 3 to 4 insects in a week. The perfect time to feed them is the night time as they are most active at night.

Emperor scorpions are large, but they do not require much space to survive. A 10-gallon tank is sufficient for a couple of Emperor Scorpions. You should get a bigger tank if you plan on keeping more than two scorpions. Install black light in the room where you will keep them. They tend to glow in blacklight. Because of their shy nature, it is better to substrate their enclosure to give them hiding spots. Their comfort should be your priority. 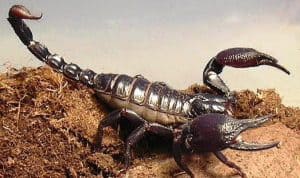 Asian Forest Scorpion is another good option for keeping as a pet. They are very similar to the Emperor Scorpion in terms of appearance. In fact, they are so identical that beginners often cannot even distinguish them.

The main difference in their appearance is their size. They are slightly smaller in size as compared to the Emperor Scorpion. Just like the Emperor Scorpion, Asian Forest Scorpion will attack only if they feel threatened and they will defend by their claws instead of stinging.

Asian Forest Scorpions love to eat, and they hardly refuse a meal. They eat insects which are appropriate in size.

This specie is very easy to care for. They are low maintenance, and they also breed easily in captivity. They need proper space to breed, and for that matter, a 10-gallon tank is sufficient. But as the family grows, you can think of getting a bigger tank for them. 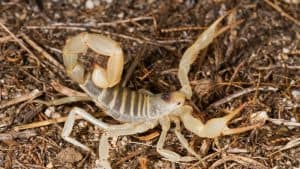 As the name suggests, Desert Hairy Scorpion is mostly found in the deserts, and it has hair on its body. They are slightly smaller in size as compared to the Emperor Scorpion, but their venom is stronger than of the Emperor Scorpion. Because of this fact, they are not recommended for beginners.

Their sting is not venomous, but it can get painful. They tend to get wary and will do an averting posture if they are provoked.

They tend to eat locusts and various smaller species of scorpions when they are in the wild. But in captivity, they love eating crickets and other smaller insects.

Desert Hairy Scorpions are territorial and aggressive; hence they need to be lodged individually. As they are found in deserts, they require a desert setup in their tank, which includes coarse sand and the humidity levels should be around 55%. The temperature has to be maintained between 70 to 90 degrees Fahrenheit (21 – 32 C).

Its nature is not aggressive, but it is more timorous around people. Because of its shy nature, it spends more of its time hiding in its den. It is considered to be one of the rarest species of scorpions in the world.

While in captivity, they tend to eat the following: 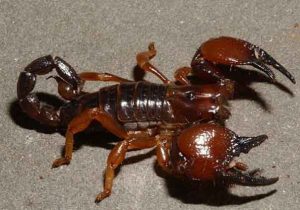 This specie is not suitable for beginners. Tanzanian Red-Clawed Scorpion is an aggressive specie and can get agitated quickly; hence, they are not recommended for beginners. They use their sting only to defend themselves.

It belongs to the same family as the Emperor Scorpion, but it is more on the hostile side and is smaller in size comparatively. Its venom is similar to that of a bee, mild in nature.

Tanzanian Red-Claw Scorpions love to hunt. They choose prey as:

This specie can survive in a humid area. Their enclosure should have humidity level from 75 to 80 per cent. They prefer temperature to be around 70 to 85 degrees Fahrenheit (21 – 29 C). They don’t get along with other scorpions, so it’s better to keep them in individual enclosures; otherwise, they will fight each other to death.

The Malaysian Black Scorpion is a quiet and hardy specie, but it can get slightly aggressive when kept in captivity.

It is similar to the Emperor Scorpion in appearance, just a little smaller in size but nature wise it is pretty defensive, and it will sting the moment it feels it is in danger.

This specie loves to feed on insects like crickets, grasshoppers and locusts and like to feed on small mice as well.

This specie belongs to the rainforests and jungles of Indonesia. Javanese Jungle Scorpion are difficult to obtain; hence they have a huge demand.

Javanese Jungle Scorpions usually protect themselves with their strong claws. Their sting is mild and similar to that of a wasp. They are not very difficult to handle; therefore they are a great choice for beginners.

The diet for this specie should include:

A 10-gallon glass tank is perfect for the Javanese Jungle Scorpion with almost three inches of substrate. The temperature should be between 75 – 90 degrees Fahrenheit (23 – 32 C) with humidity levels at 55%. 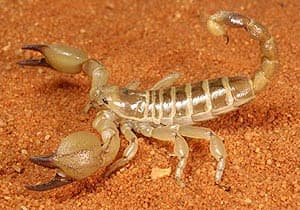 Large Clawed Scorpions are the habitats of wild deserts of the Middle East and Northern Africa. They are smaller in size as compared to the above species.

They are also known as Israeli Gold Scorpions. Large Clawed Scorpions are excellent diggers and are usually found in burrows. They have a wary attitude, and they use their big strong claws for defence.

They are not likely to sting, but when they do, their venom is not dangerous but mildly painful.

Large Clawed Scorpions love to feast on crickets and locusts.

Because their natural environment is based on deserts, it becomes difficult to give them the same environment in captivity. They require a mixture of sand and eco earth substrate in their enclosure. The optimal temperature should be between 75-80 degrees Fahrenheit (23 – 26) with humidity at 75-80%.

Some people are full of surprises. Their interests are different from the usual typical kind of people. They do such different things which make the other person go in awe. An example of such type of people is who like to keep unconventional pets.

Not everyone can agree with having a scorpion pet. Some even might wonder how it works with a scorpion. It is just like keeping any other conventional pet. The only difference is that you don’t get to have cuddly moments with it. You cannot pet it like you do a dog or a cat. Having a scorpion can be a different experience but adventurous at the same time.

4 thoughts on “The Most Popular Scorpion Species Suitable As Pets”