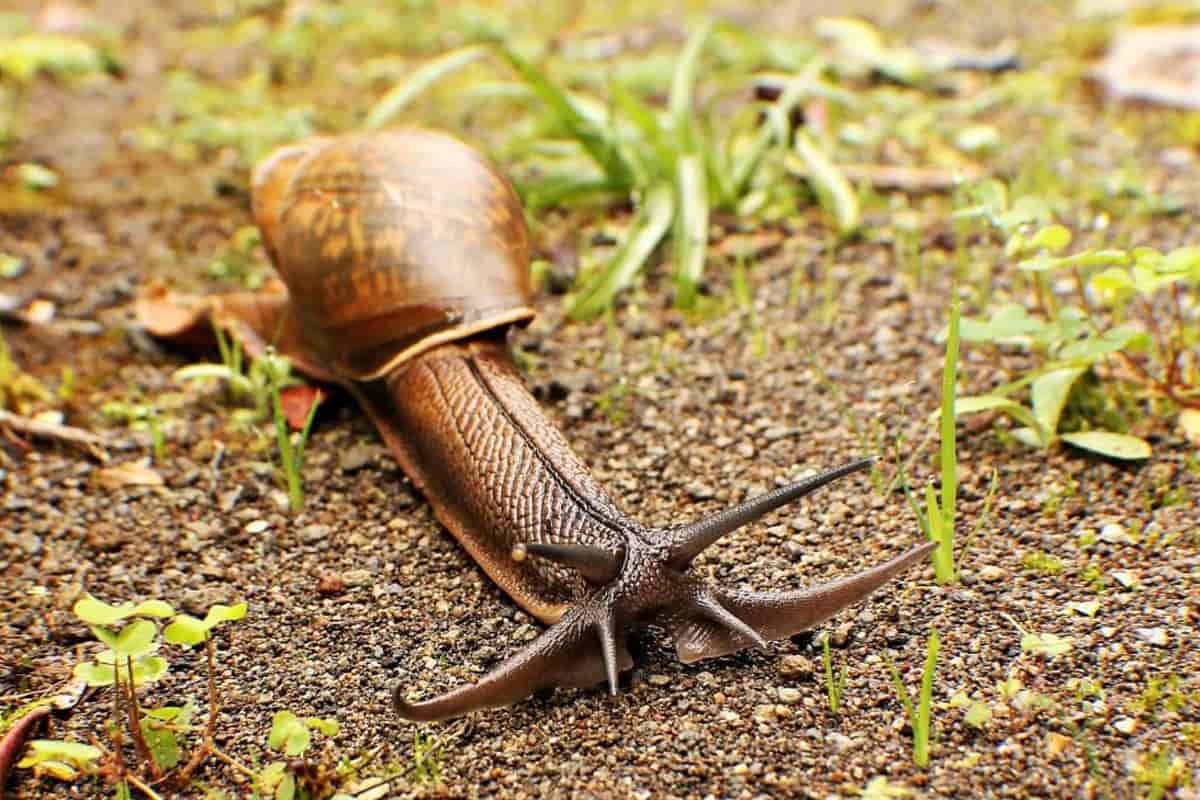 We used to think that land snails are cute and harmless creatures that have no means to attack anybody. Well, contrary to the popular belief, this is not so. There are several species of predatory snails that feed on their fellows and the Rosy Wolfsnail (Euglandina rosea) is one of them.

Rosy Wolfsnails are carnivorous in their feeding habits. They feed on live organisms, including worms, slugs, and other snails.

Nonetheless, if you are thinking of keeping the Wolf snail in your terrarium, or simply want to learn more about this species, you have come to the right place. I have gathered all information about this species based on existing studies, experiments, researches, and the experience of enthusiasts.

This complete care guide for Euglandina rosea covers all aspects, from natural habitat conditions and how they should be cared for within your terrarium, to dietary requirements and how to breed them.

Unfortunately, instead of control Achatina fulica, it has impacted numerous endemic land snail species. Hawaii had 750 species of native land snails, and today more than half are extinct due to predation by Rosy wolfsnails.

In the wild, these snails prefer to live singly in hardwood forests, roadsides, and urban gardens.

The Rosy wolfsnail is a medium-sized to a large terrestrial snail. They can grow to a maximum size of around 2.5 – 3 inches (6 – 7.5 cm) in height and 1 inch (2.5 cm) in diameter. The shape of the shell is fusiform with a narrow ovate-lunate aperture.

Their shells can vary in color from pinkish-brown or light-brown to almost translucent. Each shell has 4 whorls and vertical striations running across each whorl of the shell that can be seen with the naked eye.

The Rosy wolfsnail has a very distinct elongate neck. The body of a fully grown snail can reach 4 inches (10 cm) when stretched out!

The body of the snails is uniformly ginger-brown. They also have 2 pairs of tentacles on the head:

Another interesting feature is that Rosy wolfsnails have lateral edges (labial palps) on either side of the mouth that resembles a mustache.

Currently, there is no data available on the average or maximum lifespan for Rosy wolf snails in the wild. However, in captivity, they can live for 2 years, if appropriately cared for.

Although Rosy wolf snails are considered nocturnal they may come out in the daytime to do some hunting as well.

According to some observations, their activity increases on warm, humid evenings. A nice rain seems to stimulate their appetites as well. In addition, normally terrestrial, Rosy wolfsnail may climb trees or even go underwater in search of its prey!

Note: Observations and experiments confirmed their ability to seek and capture aquatic snails. These results suggest that this carnivorous snail can have some negative effects on populations of endemic freshwater snails as well.

These snails sometimes burrow under mulch and boards or plywood on the soil.

Rosy Wolfsnails are voracious predators. They spend almost all their time tracking prey and mates by following slime trails. As I have already said, Rosy wolf snails have 2 oral tentacles that have chemical receptors, which allow them unmistakably to follow the slime trails of their victims.

According to the study, Rosy wolfsnails consistently follow trails in the direction in which they were laid. Mucous trail following is a primary means by which many predatory snails locate prey.

Considering the fact that they move 2 – 3 times faster than most snail species, it greatly increases their chances to capture prey.

Generally, Rosy wolf snails are not social. Even more, they can be aggressive towards each other especially if they are very hungry and do not sense other food around. However, it does not happen very often. Laboratory experiments suggested that such cannibalism is rare and only occurs when conspecific individuals are covered in prey mucus.

Rosy wolfsnail is an active predator. This carnivorous snail is feeding specialists on other mollusks (such as slugs, clams, and snails).

Depending on their size, they use 2 ways to dine on other snails:

In this case, the Rosy wolfsnails start biting the exposed body, causing the prey to pull back into its shell thus preventing escape. After that, it uses its long neck to go into the prey’s shell and finishes it there. At the same time, they use their mouthparts to catch and hold the prey.

The ability to evert the mouth into a prolonged proboscis (a dagger-like radula, which tears off chunks of flesh) helps them to reach deeply into the coils of its prey’s shell.

Even though many land snail species have a “door” (an operculum) which they use to completely close their shell when disturbed or threatened, it does not save them from this predator. The Rosy wolfsnails are strong enough to push through this defense to consume the soft tissue.

In captivity, Rosy wolfsnails will not survive on supplements. They need live prey:

It is possible to feed them small Achatina and Arhatina, but alternate with other food snails! There are some reports that feeding them with one species alone leads them to death due to lack of nutrients.

Healthy Rosy wolfsnails can catch prey even if it is larger than them. However, it can be too difficult when their prey three or more times as heavy as themselves. After several attempts, they may give up. Some scientists believe that it could be the reason why they failed to control Achatina fulica in Hawaii.

Therefore, ideally, their prey should be about 1.5 – 2 times smaller than the shell of a predator.

Rosy wolfsnails are rarely kept in captivity. Even though their care is quite easy. After all, Euglandina rosea is one of the worst invasive species, remember?

There are several options here. It can be either aquarium or a plastic container.

Actually, plastic containers can be a great choice. It is cheap and you can easily drill a few small holes on two opposite sides of the walls to create proper ventilation.

It is not recommended to keep Rosy wolfsnails even with their own kind. So, a 2-3 gallon (8 – 12 liters) tank is recommended for one snail.

Make sure it has a stable lid! Like all snails, they are excellent escape artists! They can and will try to climb out of their tank when given the chance.

The best options for the substrate are coconut fiber, soil, and peat. Avoid any type of gravel substrate. Because of the size and weight, land snails can easily break their shells.

Rosy wolfsnails prefer a warm and humid environment, the range of optimal temperatures is anywhere between 71 – 79 °F (22 – 26 °C).

Note: Snails are “cold-blooded” or, in other words, their body temperature completely depends on the temperature in their surrounding environment.

Any big fluctuations in temperature or a cold day can drastically reduce the warmth in a tank that can potentially cause your snail to suffer from temperature shock.

In this case, it can be a good idea to have a heat mat under the tank to keep the tank warm.

This is normally a trial and error process, so expect it to take some adjusting to get it perfect.

No, there is no need to have a water dish in their tank.

Even though land snails also need water (this is a fact) they derive most of their water requirements from the soil and food.

Rosy wolfsnails are nocturnal animals. They do not require any lighting.

In the wild, at night or after rain, they tend to congregate in small numbers to mate.  When they mate, they inseminate one another because Rosy wolfsnails are hermaphroditic, having reproductive organs for both sexes.

After several weeks of incubation, adults typically lay 20 to 40 eggs in a shallow pocket in the moist soil. Depending on the temperature, these eggs hatch after 30 to 40 days.

Newly hatched juveniles can discriminate between conspecific and other potential prey species. However, in the absence of food, smaller siblings can be eaten.

Rosy wolfsnail (Euglandina rosea) is a carnivorous species and a voracious predator, hunting and eating other snails and slugs.

You should only keep this snail if you are willing to give it special care and attention since it cannot thrive on other food items.

6 thoughts on “The Rosy Wolfsnail Profile”