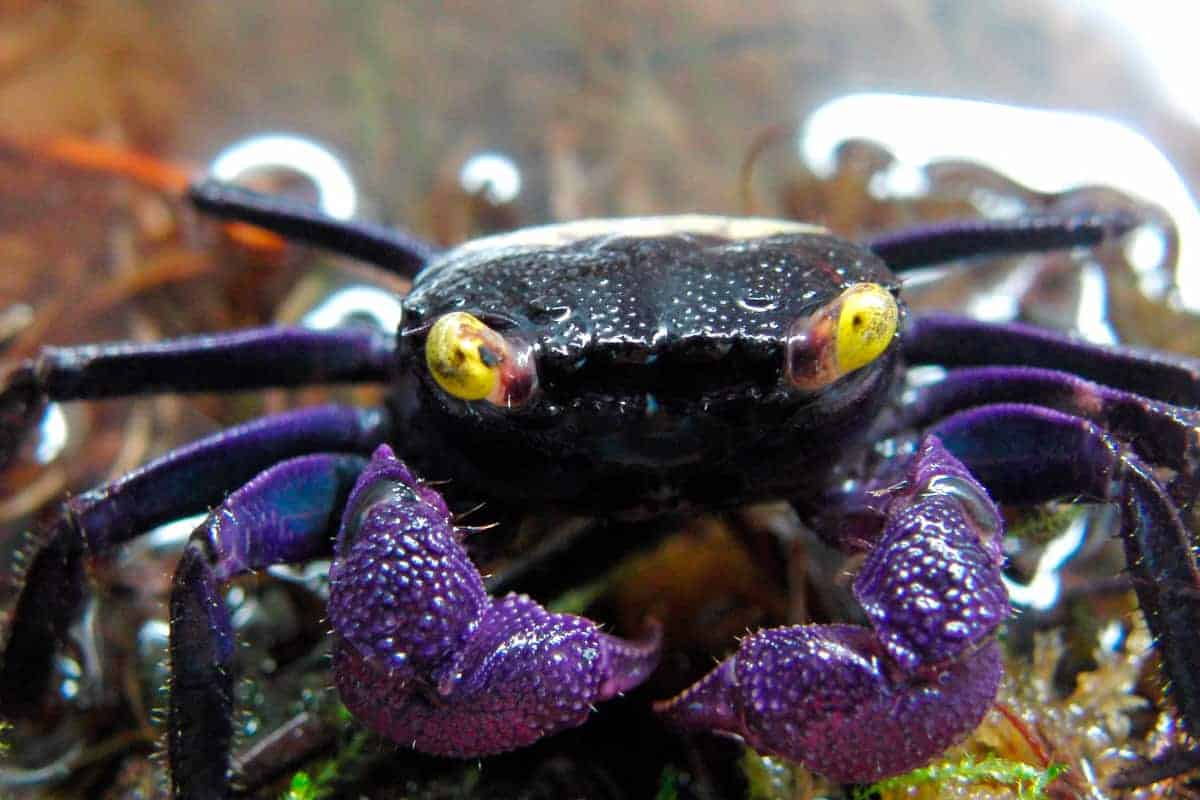 Although Vampire crabs (Geosesarma dennerle) are relatively new to the hobby, they have already become rising in their popularity as ornamental species in recent years. The only problem with Geosesarma species is that their ecology and biology is still poorly studied. As a result, there is a lot of wrong information or downright confusion when it comes to caring for them.

Vampire crabs are not freshwater crabs, they are semi-terrestrial animals. These crabs are sociable, omnivorous, pretty hardy and easy to care for.

They were first introduced in 2006. Since then there has been an increasing number of colorful land-dwelling crabs sold for the ornamental fish trade in Europe, Asia, and America going under the name “Vampire crabs”.
Interesting fact: According to “Shrimp King” Christian Lukhaup, these species have been in the aquarium trade for many years but no one knew where they come from.

Taxonomy of the Geosesarma sp.

The genus Geosesarma includes a group of semi-terrestrial crabs widely distributed in Southeast Asia, the eastern Indian Ocean, and the western Pacific. Currently, this genus contains 58 recognized species. Although new species are continually being described, taxonomy at the genus level is still in a state of flux.

The two most common and popular color forms are:

Natural Habitat of the Vampire Crab

Geosesarma Dennerle (and Geosesarma Hagen) share the same natural habitat. They live in forests (between rocks and among the dense vegetation) near freshwater rivers and lakes. They do not depend on saltwater for development.

Description of the Vampire Crab

Like most Geosesarma species, Vampire crabs are nocturnal and shy. However, from time to time you will also see them at dusk or even during the day.

They are pretty small. Vampire crabs barely reach 5 cm (2 inches) across the leg span. Their carapace (shell width) is about 2.5cm (~1 inch) wide. It makes them ideal for keeping in small (medium) terrariums or paludariums.

The claws do not open very wide. Therefore, it is very hard for them even to pinch you.

Their spectacular colors (bright purple claws, yellow eyes and violet purple to purplish- brown carapace with cream to yellowish-white spot on the back) explain their attraction to aquarists.

Vampire crabs do not live long. They usually achieve a life expectancy of 2 years or slightly more.

Why are They Called Vampire Crabs?

There are several theories on why Vampire crabs are named like that. According to the first theory, this is because of their glowing yellow eyes and creamy spots on the backs that can have a “Bat-like” shape. The second theory says that there is no any mystery. This is just a good marketing move. Because catchy names always attract anyone’s attention and this helps in self-promotion.

The Behavior of the Vampire Crab

Vampire crabs show an interesting behavior. In general, they are peaceful among each other, but not with crabs of a different kind. For example, if you put Geosesarma Hagen (Red devil crab) and Geosesarma Dennerle (Vampire crab) together, they will fight more often.

Note: Clearly, we have a species competition here. Biologists believe that this is because, in the wild, they occupy the same space at the same time.

Vampire crabs are not very active. Once they find a place where they like to sit, they will stay there for long periods. However, it does not mean that they are slow. These crabs can sprint for short distances very well.

Like with all crabs, they have the same gender differences:

Like the other members of Crustacea, Vampire crab has a hard exoskeleton that protects its internal organs. However, the problem is that this rigid exoskeleton (shell) also prevents growing. Therefore, in order to grow, they have to shed the old shell. So, molting is a process of shedding their hard and old exoskeletons. After that they grow new, larger ones as their size increases.

During the first 6 months of life, Vampire shrimp molt many times. This number decreases to 1 time per month as they become adults.

Important: In Vampire crabs, both molting and breeding occur in freshwater that is unique to this type of crab.
Keep in mind that, during the molting process and right after it, they are extremely vulnerable. So, you will have to prove a lot of hiding places or other crabs can eat a molted one.

For more information, read my article “Crabs and Molting Process”.

Like all snails, shrimp, and crayfish, crabs, also require a lot of calcium for their exoskeleton.

Keeping and Caring for Vampire Crab

Keeping Vampire crabs is easy if you know how to care for them the right way.

First of all, I need to start off by saying that Vampire crabs require more land than water (Paludarium). That is why they are not suitable for freshwater tanks! Unfortunately, this is a very common mistake between crab keepers. They believe that it will be enough if they provide them with rocks and driftwood to climb and sit on. Well, this is wrong!

If we really want to give them a comfortable environment where they can thrive and breed, we have to mimic their natural habitat.

That is why it is recommended to give them more land surface in their tank. For example, an 80/20 setup of land and water (or at least 50/50) would be preferable. Vampire crabs stay more time in land area than in water. They do not need a lot of water. As long as water pools can completely cover their entire bodies, they will be fine. Ideally, the paludariums must contain a 10 – 15 cm (4 – 6 inches) deep bottom tray with freshwater.

Important: Vampire crabs cannot stay in water for a long time. They will drown. It is crucial to provide a variety of surfaces for them to get out of the water.

So, if you are not going to use a filter in their setup, you will need to replace the water regularly. Do not let it sit in the tank for ages! Vampire crabs need a good water source if you intend to keep them long term.

Tip: Every time you replace water, use Seachem Prime (link to check the price on Amazon) to dechlorinate it.  Chlorine is dangerous for them.

Note: Depending on the setup, an outside canister filter can be a good choice. In this case, you will need to Remineralize water with Salty Shrimp GH/KH+ or GH+ (Read more about it here).

They do not require anything big. It is possible to keep several Vampire crabs (1 male and 2 females) in a 5-gallon tank. However, if you want to increase the colony, it would be better to have at least a 10-gallon tank.

Tip# 1: Floor space is more important than height.
Tip #2: These crabs are great escape artists. So, a tight-fitting lid is essential.

The substrate in the tank should be made of gravel, earth, sand, or sand-earth mixture to nibble at and excavate in.

In nature, Vampire crabs live in leaf litter and rotten wood near streams in the wild. So, they will appreciate all types of leaves, rocks, wood, plants, PVC pipes, etc. in your tank.

They do not eat healthy plants and can, therefore, be kept in beautifully planted terrassapes. Actually, Vampire crabs can benefit from live plants by collecting bacteria and microorganisms off them.

Do not forget that Vampire crabs also need stable humidity around 75% or higher. This is one of the reasons why people fail to keep them.

The mating process is quite simple. Vampire crabs do not have any mating rituals. The male simply flips the female upside down, and wrap himself around her to fertilize.

After mating, it takes about 1 month for the eggs to hatch out. Before hatching, females become even more secretive and start hiding almost all the time. Depending on the size, the females can carry from 20 to 80 eggs. They have large eggs and direct development (no larval stages).

Females give birth to live, fully formed miniatures of the adult Vampire crab. They release young into freshwater. Freshly hatched young crabs are only 1 – 2 mm long. They cannot live separately from the mother and stay with her (still under the abdomen) for up to several weeks.

Unfortunately, cannibalism can also be found among the crabs when the brood-care behavior is ended. That is why it is advisable to separate the mother from the baby crabs. Otherwise, only a small number will reach the adult stage.

Note: Keep in mind that young crabs can also become prey to the siblings during the molt. So, it is absolutely crucial to have as many hiding places as possible. Ideally, you should also separate them by size.

Vampire Crabs are social animals that do well in a community with their own kind. Therefore, if you decide to keep different types of Geosesarma species (such as Tangerine-head crab, Red Devil crabs, etc.) or but Metasesarma species (like Red Apple crab, Marble crabs, etc.) . in the tank, be ready for conflicts and territorial disputes.

Keep in mind that Vampire crabs will lose the fights most times.

If aquarium size allows and you are planning to keep shrimp and fish with them, I need to warn you that there will be losses from time to time. Because of predation, it is not advisable to keep them with small snails at all.

Vampire crabs (Geosesarma dennerle) have a striking appearance and look great in paludariums. They are social amongst each other so it is recommended they be kept in groups.

This species is semi-terrestrial and relatively easy to care for. You will never have any problem with feeding them because Vampire crabs are scavengers and will eat nearly anything on the tank floor.