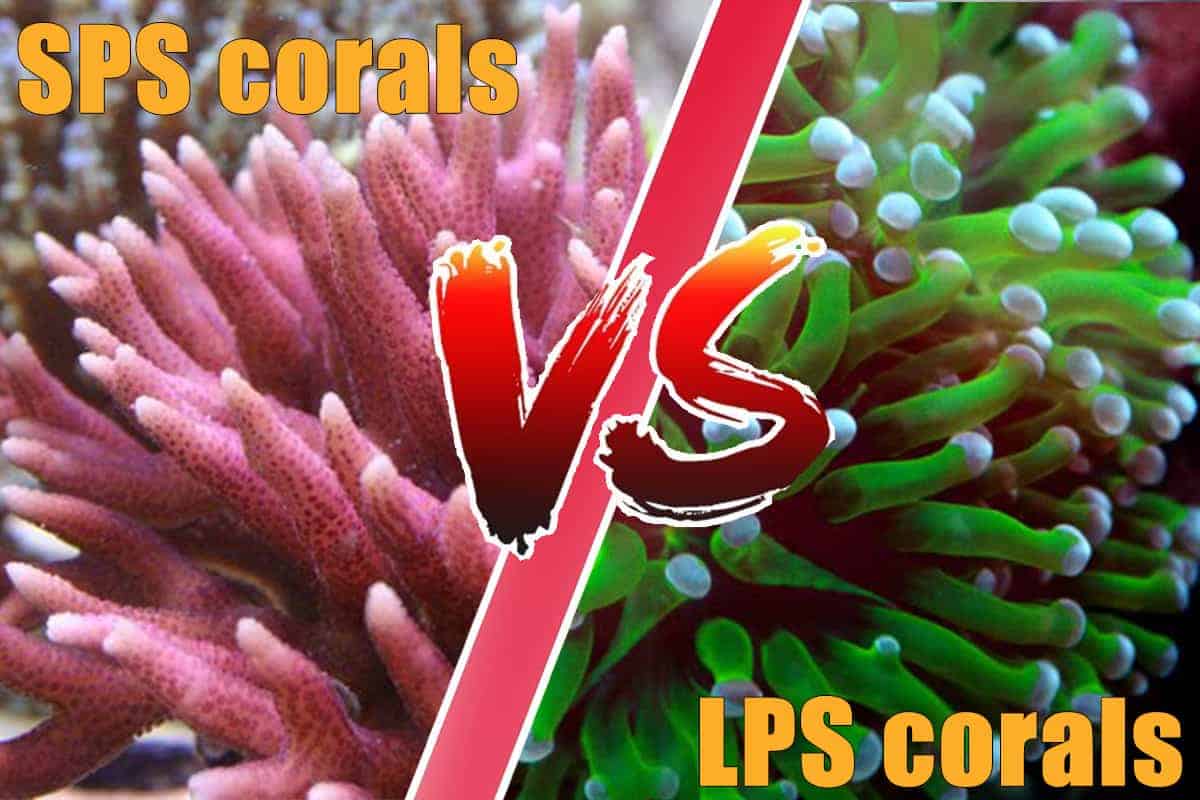 Whether new or acquainted with the saltwater aquarium hobby, it would be a wise and responsible decision to gain adequate information regarding the various coral types and their needs before acquiring and subjecting any species to the conditions of your tank.

This article focuses on enlightening reef aquarists and enthusiasts about a specific classification of marine corals— the hard corals. Here, I will explore the different types, characteristics, and best captive care requirements/practices to ensure their growth and survival.

Hard or stony corals belong to the Order Scleractinia. They are known to be the building block of coral reefs due to the multitude of hard, calcified skeletons they build and leave behind after their demise. They are found all over the world in oceans from the tidal zone to depths of nearly 6,000 meters (3.7 miles).

Hard corals can be differentiated from soft corals with the presence of a calcareous skeletal structure— formed from the secretion of calcium carbonate (CaCO3) to protect its delicate, soft body, in addition, they are usually more colorful and vibrant than soft corals.

Unlike soft corals, many stony corals are capable of feeding through photosynthesis with the aid of the symbiotic algae living in their tissue; this symbiont is known as zooxanthellae.

These corals are classified as hard or stony due to the rigid calcified skeletons they possess. Furthermore, they have varying characteristics and care requirements. It is mandatory to supplement the aquarium water with calcium additives to keep the concentration at the right level for best growth and development.

LPS corals are stony or hard corals that possess large, fleshy polyps which inflate with water and conceal the bony or hard skeleton underneath.

You may see an LPS coral having just one large polyp with one large mouth e.g. Scolymia, or several heads/polyps like Hammer corals, Torch corals, Frogspawn corals, and Duncans, with a single mouth located on the center of each head.

LPS corals exist either as solitary or colonial, forming huge populations that can thrive in waters with low to moderate flow and bright lighting conditions (preference varies amongst species).

In nature, they dwell in diverse areas of the reef, typically in deeper zones with less light penetration and moderate currents. Additionally, LPS corals inhabit shallow lagoons and seagrass beds with less flow and ample currents on some occasions.

Most large polyp stony corals are very aggressive. They possess defense mechanisms in the form of long sweeper tentacles equipped with stinging cells which they use to deliver potent stings to competitors or nearby tankmates.

This is the other type of hard or stony corals, SPS means “Soft Polyp Stony” corals or Soft Polyp Scleractinian”.

SPS corals have small or tiny polyps when compared to their counterparts— LPS corals. They are less aggressive, and they possess a stony calcareous skeleton covered in thin skin. The body of an SPS coral is composed of several hundreds of tiny polyps, each having its own mouth.

SPS corals are considered as the true reef-builders. They occur in branching, staghorn, tabling, or plating (disc) growth forms, and other patterns like swirls.

By far, they benefit hugely from stronger water flow conditions as it helps remove waste or detritus from their surfaces and also brings food closer to the small polyps.

Prime examples of SPS corals kept in the hobby include:

Which Hard Coral Type is Easier to Keep?

A trip to online reef aquarium forums will expose you to a lot of discourse on LPS vs SPS corals, and from what I have seen and experienced; it appears that many consider SPS corals as the more difficult and challenging coral type to keep in reef tanks.

It is worth mentioning that some LPS coral species prefer high water flow and high lighting, so keep that in mind while making choices for your reef tank. It is very common to hear hobbyists mention that LPS corals are ideal for beginners while SPS corals are for experienced aquarists or experts.

However, these views are generalizations.

I am of the opinion that both types/groups of hard corals have species that can be categorized as easy, moderate, or hard, and that’s why it’s essential to study the species properly before making a purchase. Meanwhile, species of SPS corals such as Montipora and Seriatopora can be easily kept by hobbyists regardless of their level of experience. Acropora is a different ball game since it is picky and less intolerant of swings in water conditions (alkalinity, temperature, salinity, hardness, etc.), thus ideal for advanced hobbyists.

Furthermore, species like Acans, Bubble corals, Duncan’s coral, and Elegance coral are good options for those that would like to introduce easy LPS corals into their established saltwater tanks. These hard corals will thrive in low – moderate flow, moderate lighting, and good water quality. Also, they require less maintenance and are more forgiving than most SPS corals.

On the contrary, Tubastrea spp. (Sun corals) are demanding and require a lot of dedication from the reef keeper, in addition, they are non-photosynthetic corals hence the need to constantly spot-feed them.

Whichever way you look at it, LPS corals still happens to be the easier and safer option if you plan on keeping a couple of stony corals in your reef aquarium.

Importantly, keep a PAR metre standby to check and ensure that the light output would be able to cater for the coral’s needs.

This is a major requirement for hard corals as it helps in feeding, supplying oxygen, flushing detritus, and keeping the polyps lively.

Note: The aforementioned variables/values/ranges highlight the optimal water conditions for keeping hard corals, however, this does not imply that it is suitable for all. Species of LPS and SPS corals can have varied lighting, temperature, flow amongst other conditions, so be sure to carry out adequate research to find out what works best for your preferred LPS/SPS coral before acquisition.

Placement of LPS and SPS Corals

For LPS corals, they should be mounted in areas with moderate lighting and flow conditions. Preferably, in the lower two-thirds of the reef tank, these corals can either be placed on rockwork or directly on the deep sand bed — such placement puts them at risk of accumulating sand grains in their hard skeletons which can result in tissue damage. However, Elegance coral and Scolymia are known exceptions to this.

Furthermore, avoid placing on shaded or overexposed areas to prevent prolonged polyp retraction or bleaching of the coral tissue. In addition, maintain a spacing of about six inches between LPS corals to avert chances of torching from the potent sweeper tentacles.

On the other hand, SPS corals are better off in areas where they can enjoy stronger lighting and high water flow, sitting on the upper sections of the aquarium seems to be the best choice. They are not known to be aggressive like LPS corals. Hence you do not need to space them out so much.

Also, remember that it’s not a good idea to house both LPS and SPS corals in one reef tank because they have varying needs and aggressive tendencies.

Finally, always monitor your hard corals to be sure that they are happy; move them to different spots if they show signs of discomfort in their present position.

Interestingly, hard corals can feed through photosynthesis, and this is possible because of the symbiotic algae (zooxanthellae) living in their tissue. Through this mechanism, LPS/SPS corals can trap light and utilize it to manufacture food that would be able to sustain it for long periods.

Note: Not all hard corals possess these symbiotic algae.

Many stony corals can capture prey suspended in the water column using their tentacles while others tend to release mucus to help trap prey such as small zooplankton, and afterward, they will transport the collected food items into their mouths by means of ciliary movements.

Moreover, you can also feed your hard corals with food items like:

To achieve the best results, target-feed both LPS and SPS corals. This entails using equipment such as a turkey baster, pipette, squirt feeder e.g. Kent Marine Sea Squirt Feeder, or coral feeding tool e.g. Julian’s Thing to squirt food particles (mixed with a bit of tank water) directly on the polyps, preferably in the center where the mouth is sited.

LPS and SPS corals are wonderful additions to established reef tanks. These hard corals come in a variety of sizes, unique growth forms, and attractive color morphs, and they are capable of improving the aesthetical appeal of your reef aquarium greatly.

There are lots of stony corals in the aquarium trade. However, make sure to research extensively about the species you plan on purchasing to understand its traits, temperament, and care requirements. First timers/beginner hobbyists should opt for beginner coral species or easy LPS/SPS packs which can be sourced from offline or online aquarium stores.

Lastly, you will witness success with LPS or SPS corals if they are properly fed and excellent water quality alongside optimal (stable) water conditions are maintained in your reef aquarium.