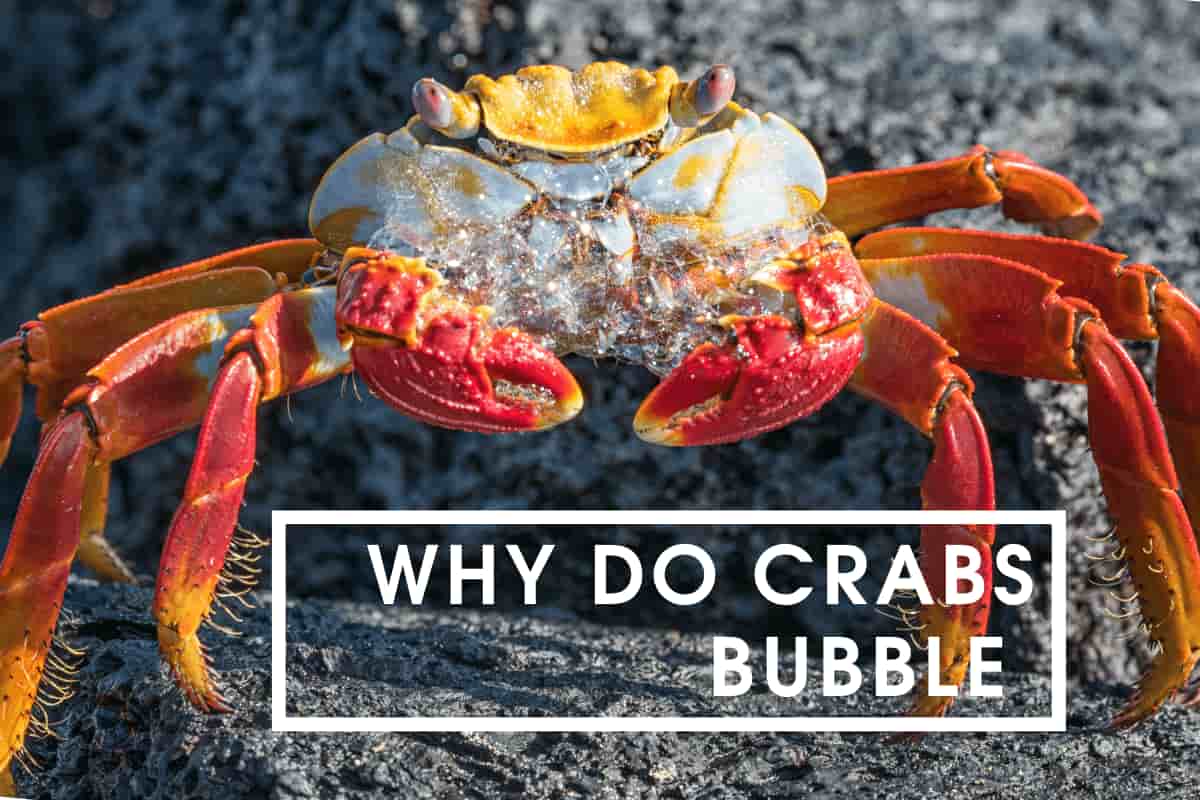 Crabs are fascinating little crustaceans who have a strange habit of blowing bubbles or foaming at the mouth during their frequent land excursions. No, they’re not rabid. This is how they protect their gills.

Crabs have become very popular pets in recent years. Unfortunately, lack of knowledge often causes panic when crab owners see some strange behavior in their pets. Do not worry, there are always reasonable explanations for that.

Underwater, this might not seem like a rabid, crazy crab waving its claws and foaming at the mouth. On the surface, however, crabs breathe out like everyone else, except that the expulsion of carbon dioxide usually occurs around the reservoirs of water surrounding the crab’s lateral gills, creating bubbles.

Do Crabs Have Lungs?

Yes and no, depending on the crab. There are three types of crab, all of which can spend time out of the water:

Aquatic crabs spend most of their time in the water and have gills similar in construction to that of fish. They breathe almost exclusively underwater, with very rare excursions to dry land.

Intertidal crabs spend time on land between the high and low tides. They have gills as well, and to spend extended periods on dry land, those gills have to remain moist to draw oxygen from the outside air.

Terrestrial crabs—such as the hermit crab—have gills as well, but they also have a rudimentary sort of lung (actually, these are modified cavities). A crab’s lungs reside inside a brachial chamber.

All three types of crab will exhibit the bubble/frothing when they are on land and it’s for the same reasons. It’s a method to keep their gills/lungs moist.

Therefore, I would not really worry too much about it.

However, if your crab keeps foaming way too long, it is a sign that it is stressed. For example, Hermit crabs bubble at the mouth as well, but when the bubbles turn brown, it’s an indication that the hermit crab is diseased, severely dehydrated, or injured in some way.

How Long Can Crabs Breathe Out Of Water?

So long as its gills remain moist, a crab can breathe outside of water for quite some time, depending on the species and how long a crab can maintain a flow of water around its gills.

It’s quite normal to see crabs expelling bubbles outside of water because when they are in the water,  it constantly flows across the gills, which extract the oxygen from the water.

On land, so long as a crab’s gills are moist, it beats its paddle-like appendages—called bailers—across its gills to stimulate the flow of water so that the crab can continue to breathe. As long as crabs can do this, they can stay on land.

Hermit crabs can go up to two weeks without a constant source of water, but for pet hermit crabs, that’s inadvisable.

Hermit crabs need a constant source of saltwater, not tap water (it’s poisonous to them), or table salt water. Filtered water with sea salt added or actual seawater is necessary, without which hermit crabs will expel brown bubbles and die soon thereafter.

The majority of crabs are amphibious crustaceans and it’s often that their land excursions will bring them into contact with humans who will observe these bubble-mouthed decapods in action.

Mostly, it’s the harmless byproduct of how their gills function to draw and release air on the surface and shouldn’t be cause for alarm.

However, if it’s brown or foaming lasts too long, especially with hermit crabs, it generally means that they need water and it’s best to provide it immediately.