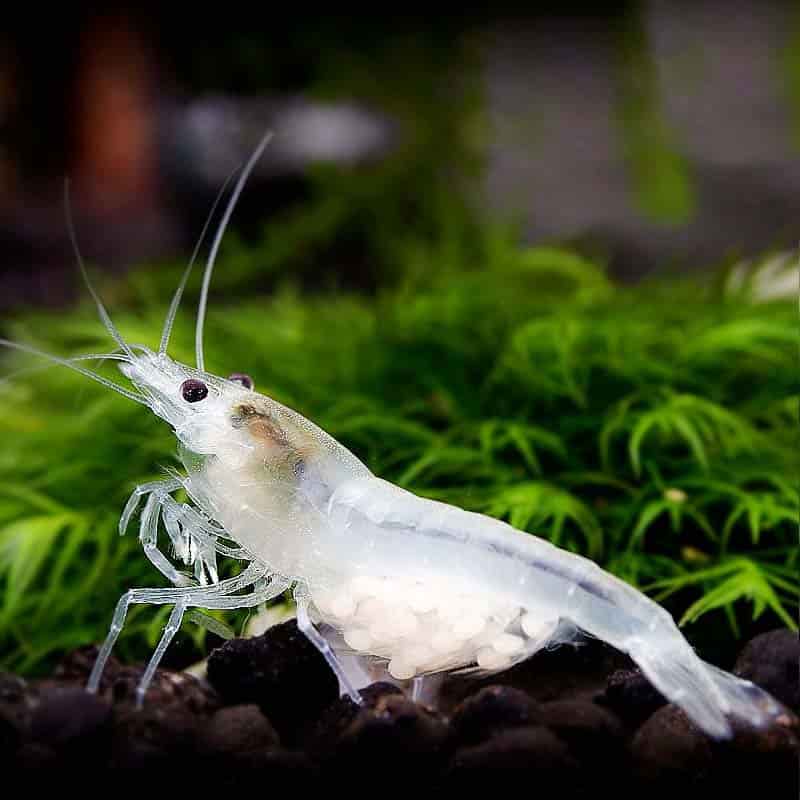 Neocaridina zhangiajiensis var. Snowball shrimp are freshwater invertebrates and belong to the family of Atyidae. They are also known as White Pearl shrimp. The origin of Neocaridina zhangiajiensis is Southeast Asia. This species is a pure white selectively bred species of the wild Neocaridina. White Pearl and Blue Pearl shrimp were both presented in Germany by Ulf Gottschalk in 2006. It took him years of selectively breeding to get a stable line of white color, which did not change in the next generations.

Snowball shrimp will stand out from other dwarf shrimps species via its pure white coloration. Without question, the Snowball shrimp will add a unique appearance to the peaceful tropical community aquarium. In addition, like any other Neocaridina shrimp, they are very prolific and hardy.

Snowball shrimp is one of the most popular shrimp species in the aquatic community. Due to the easiness of keeping and breeding them, they are an excellent choice even for beginners in this hobby. 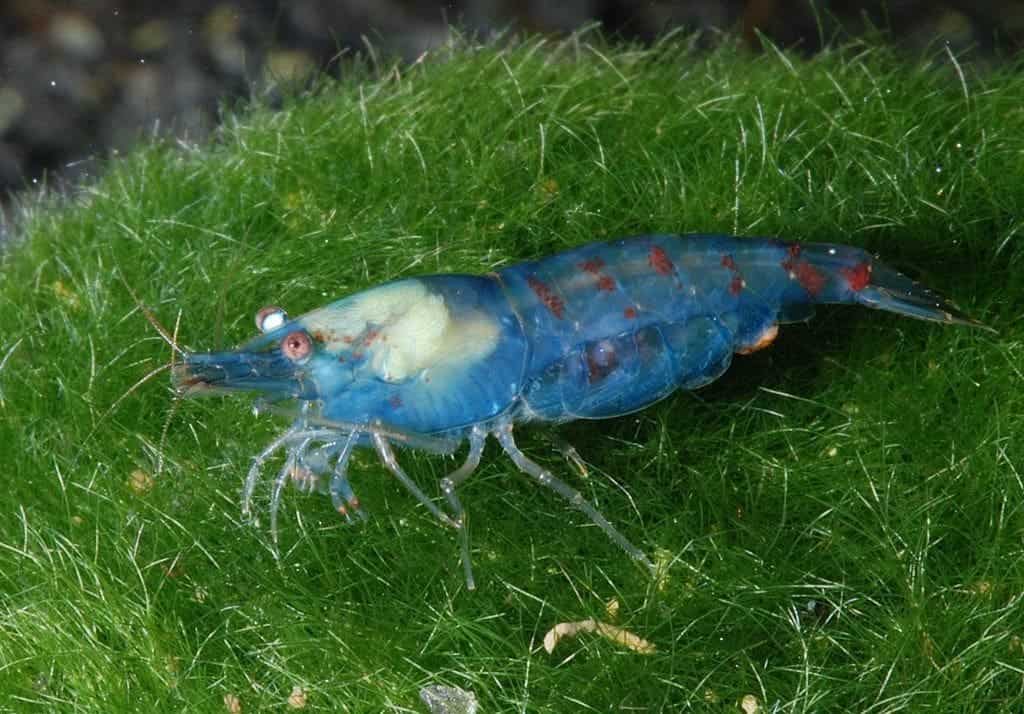 Actually, I would like to start off by saying that everything that is described here about Snowball shrimp is applied to Blue Pearl shrimp as well. Basically, they are the same in everything but color. Therefore, there is no need to create a separate guide about Blue Pearl shrimp.

Blue Pearl shrimp was selected from Snowball shrimp. It is also possible to see that some Blue Pearl shrimp have tiny red spots along the body. Perhaps this is because the full stable line of blue color was not finished by Ulf Gottschalk. As a result, some red blotches remained from the wild type. However, these red spots do not mean that it is a hybrid.

I have already mentioned in one of my articles that the taxonomy of Neocaridina remains partially conflicting and unclear. This is exactly what we have here.

I believe that anybody who has been in this hobby for some time knows a very controversial Snowball’s shrimp taxonomy. Is it Neocaridina zhangjiajiensis or Neocaridina palmate?

For a long period of time, everybody thought that Snowball shrimp was selectively bred variants of the Neocaridina cf. zhangjiajiensis. However, a few years ago, taxonomists from Crusta10 showed that these shrimp belonged to Neocaridina palmata. Later, in 2013, there was a huge reclassification by these taxonomists (in this case Werner Kotz and Andreas Karge). According to their research Neocaridina zhangiajiensis var. Snowball should be reclassified as Neocaridina palmate var. Snowball. They planned to publish the study in the new (3rd) edition of “Süßwassergarnelen aus aller Welt”, Dähne Verlag.

Unfortunately, I could not get my hands on the magazine. Nonetheless, any changes or reclassification for any species has to be peer-reviewed. Without it, any changes cannot just be accepted as new data.

Here comes an interesting part. Since their studies, the absolute majority of German sites have been using new classification. Nonetheless, there have been no official changes in taxonomy yet. Thus, the library stays as is until we have an official confirmation.

Note: Crusta10 was the self-initiative group who had taken responsibility for figuring out the taxonomy of many of the shrimp.

This group of scientists studied the shrimp and other invertebrates and gave them real names and classifications, which could be charted and documented so that people stop assigning names based on appearance. Regrettably, their website is not working anymore.

Snowball Shrimp is considered one of the most beautiful shrimp in the hobby.

These little creatures are a translucent white, with some individuals featuring a slight blue tint. There is a theory that the shrimp are actually named for their eggs, which are also pure white and look like tiny snowballs.

The white body and even whiter eggs look especially distinctive against a green (such as plants) or dark substrate (background).  Even when not carrying eggs, the females have snow-white “saddles” (eggs developing in their ovaries) on their necks, which is also very attractive looking.  These shrimp are bound to conquer the hearts of the shrimp hobbyists.

It is recommended to have at least 10 Snowball shrimp in the tank. They are very social and the number gives them more confidence and makes them less stressed.

Snowball Shrimp are not picky eaters in aquaria and you can serve them all kinds of food. Like all scavengers, they can survive mostly off detritus, algae, and microorganisms (biofilm) that grow on the submerged leaves. However, in a clean aquarium, though, the occasional supplemental feeding is necessary.

For example, you can combine blanched greens (lettuce, zucchini, spinach, etc.) with prepared foods like flakes, algae wafers, and other shrimp or fish food. In order to add some variety to the diet and improve their immune system, it will be a good idea to give them some Indian almond leaves, alder cones, etc.

Do not overfeed. This is a universal rule and it concerns all kinds of shrimp species. I cannot even stress enough how important this rule is. Unfortunately, a lot of beginner shrimp breeders usually forget about it or believe that it is not a big deal to give them a little bit more.

Overfeeding and rather dirty tanks are the main cause of such parasites as Planaria, Hydra, Scutariella Japonica, Vorticella (read my articles about them) and etc. You do not want to have that in your tank! Especially something like Ellobiopsidae.

Note: Depending on the diet, Snowball shrimp can have a very distinctive look because of the transparency.

You can read more about it in my articles:

How and What to Feed your Shrimp.
How Often and How Much to Feed Shrimp.
Indian Almond Leaves and Alder Cones in a Shrimp Tank.
How to Blanch Сucumbers and Zucchini for Shrimp, Snails and Fish the Right Way.
In addition, you can read my article “Top Food for the Shrimp – Bacter AE”.

Besides their beauty, there is the second reason why Snowball shrimp have become one of the most popular shrimp species in Germany and why they are bound to conquer the rest of the World. The reason for that is that they share the same hardiness and fertility as the Red Cherry Shrimp.

Therefore, if you are beginner aquarists or maybe you are just looking for an easy shrimp to care for, Snowball shrimp is your safe choice.  Neocaridinas species are very hardy, that is why they do not require elaborate tank setups. Snowball shrimp can tolerate more fluctuations compared to other shrimp species. However, it does not mean that you can completely abandon the tank.

The main rule in shrimp breeding – try to keep your water parameters as stable as possible.

Note: Do not forget to acclimatize them slowly before putting them into their new home.

Snowball shrimp are also very easy to breed. Keep the optimal ratio of females and males and they will multiply into a large colony like rabbits. Once again, you do not need to do anything for that just toss them in your tank and they breed like crazy.

When they are about 2 to 3 months of age, Snowball shrimp become sexually mature. The females will begin to carry a clutch of yellowish eggs under their tail.

Because of the white color, it is possible to see the eyes of shrimplets through the eggshells, when hatching is only a few days away. Each Snowball female will release from 30 to 50 fully developed tiny shrimp every 5 to 6 weeks. Young shrimp are not painted at all, so it is easy for an aquarist to miss them.

Do not be afraid to overpopulate the tank.

Unlike some other shrimp species, it is very easy to see the difference between Snowball females and males. The females are larger than males. They also have a saddle and a curved underbelly, which you can see with your naked eye. You can also notice that the males have a little bit less white coloration.

Note: Provide them with plants and some places to hide for the females. After molting (during the mating period) they are very soft and vulnerable as any shrimp.

Tip:  If you have a sponge filter, you need to cover an intake, in order to prevent baby shrimp to enter the filter.

Please be aware that because it is a Neocaridina species, it can interbreed readily with the other Neocaridina species. Interbreeding can result in brown or wildtype baby shrimp in the 2nd generation and beyond. The color will be lost and you will not be able to restore it by yourself.

Snowball shrimp are very social, peaceful and undemanding creatures. Other aquarium inhabitants have nothing to fear from them. All kinds of snails (Japanese trapdoor snails, White Wizard Snails, Mystery snails, Malaysian Trumpet Snails, Ramshorn Snails, Rabbit Snails, Nerite snails, even Assassin Snails) will be good companions for the Snowball shrimp.

Tip: If you do not want to lose the color of your shrimp, you should not keep them with other Neocaridina species (for example, Red cherry shrimp, Blue tiger shrimp, Blue Velvet Shrimp, etc) because of the risk of hybridization.

It is possible to keep them together with fish that do not predate on shrimp. You can read more about how to keep shrimp in a community tank right here.

They are quite adaptable and can thrive in a wide range of conditions. It makes them definitely in the top list even for those who decide to set up the very first shrimp tank. In addition to being easy to care for, Snowball shrimp are very prolific shrimp. Under optimal conditions, females are almost all the time berried.

Overall, Snowball shrimp are a great choice for beginners and experienced shrimp breeders.

Due to the fact that scorpions comprise a few thousand species, it is absolutely not possible to mention all the anatomical differences between them in one article. Therefore, I will describe the...

Arachno-hobby has been increasing for the past few decades. More and more people keep scorpions as pets. Unfortunately, owing to the difficulties involved in the identification of the...